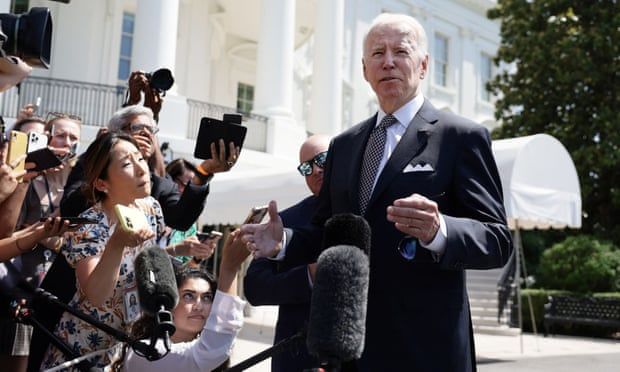 Joe Biden has acknowledged in an interview that the American people are “really, really down” after a relentless two years of disease and division, rising cost of living, war in Europe and the devastating impact of the climate crisis.

Speaking to the Associated Press in a rare one-on-one interview in the Oval Office on Thursday afternoon, the president touched on many topics from war to hair.

“People are really, really down,” Biden told the Associated Press White House reporter Josh Boak, according to a transcript of the interview. “They’re really down.”

The sit-down came at a difficult moment for the US president, whose approval ratings have dipped below 40% in recent public opinion polls less than five months before the midterm elections.

Biden said the cost of gas and food was a “direct barometer” of how people felt about the economy and the direction of the country. As costs rise, so too does the dissatisfaction many Americans feel.

“I fully understand why the average voter out there is just confused and upset and worried,” Biden said.

In the midst of many crises, Biden added: “We have a little thing called climate change going on and it’s having profound impacts.” He noted the “tundra melting” and heating of the polar ice caps, and the record flooding that prompted closures and huge damage this week at Yellowstone national park.

“It’s totally understandable that [people] are worried because they look around and see, ‘My God, everything is changing,’” he said.

In the interview, Biden acknowledged that standing up to Russia with economic sanctions and billions of dollars in military and humanitarian aid to Ukraine, as the Russian invasion persists, came with costs for the nation – and his presidency.

“There was going to be a price to pay” for helping Ukraine, Biden said. But he argued that “the option of doing nothing was worse”.

Had the US chosen isolationism over internationalism, it could have put the entire liberal world order at risk, opening the door to a wider invasion of Europe, Biden said. The response to Russia also served as a clear warning to China and North Korea, he added.

But with the war exacerbating prices, there are signs that Americans are becoming less supportive of punishing Russia if it comes at an economic cost to their pocketbook.

“I’m the president of the United States,” he said. “It’s not about my political survival. It’s about what’s best for the country.”

His presidency has had some key victories. Biden touted his 2021 legislative achievements – a nearly $2tn coronavirus stimulus package and a bipartisan infrastructure law – and raised the prospect that there was more to come after his agenda stalled on Capitol Hill.

Among the proposals he said had enough support in the Senate he named plans to lower the cost of prescription drugs, reduce energy costs, improve supply-chain issues related to semiconductors, and impose a 15% minimum tax on corporations and tax hikes on the “super wealthy”.

Biden pushed back on any suggestion that the coronavirus stimulus plan passed in the early days of his presidency contributed to inflation, despite attacks from Republicans and growing agreement among economists and his own treasury secretary, Janet Yellen, that it did, at least to some degree.

“You could argue whether it had a marginal, minor impact on inflation,” Biden said of the American Rescue Plan. “I don’t think it did.”

Biden also downplayed fears of a recession. “First of all, it’s not inevitable,” he said. “Secondly, we’re in a stronger position than any nation in the world to overcome this inflation.”

His optimism, he said, stemmed from the low unemployment rate and the strength of the country’s economic recovery relative to other developed nations. But few Americans express confidence in the president’s leadership on the economy, with Republicans in a strong position to take control of Congress.

And an overturning of Roe v Wade-ushered abortion rights by a conservative-leaning US supreme court, as is widely expected later this month, would have electoral consequences for Republicans, Biden predicted.

“Even people who are not pro-choice are going to find it really, really off the wall when a woman goes across a state line and she gets arrested,” he said, indicating what could happen if Roe is stripped and many states ban abortion while others continue to provide it.

“There’s so many things these guys are doing that are out of the mainstream of where the public is.”

Biden has given far fewer interviews than his recent predecessors.

The interview was peppered with Bidenisms: “not a joke”, he said twice and later assuring the reporter he wasn’t trying to be “a wise guy”. “All kidding aside, here’s the deal,” he said, after doling out some parenting advice.

Near the end of the interview, Biden begins to lash out at Republicans, calling them “very Maga”, meaning loyalists to Donald Trump and his nationalist Make America Great Again campaign slogan, with the exception of “15 sort of traditional, mainstream, conservative Republicans”.

He counted the Senate minority leader, Mitch McConnell, among them, a view that he acknowledged draws the ire of many Democrats over his hardline stances on Democratic-led legislation and, for example, blocking Barack Obama’s supreme court nomination of Merrick Garland, now Biden’s attorney general.

Meanwhile, he joshed Boak as a “young man”. Boak said his hair was graying.

“At least you’re keeping it,” Biden joked. “I’d settle for orange if I had more hair.”