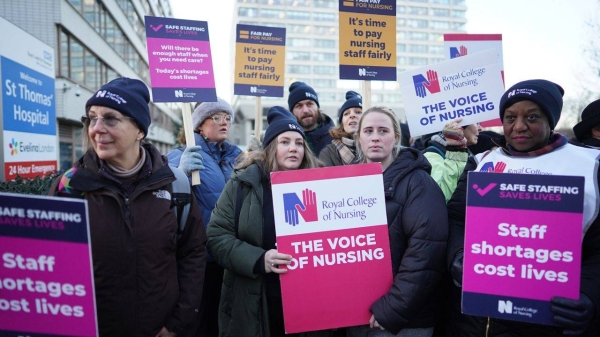 Nurses across much of the UK launched a historic strike on Thursday, as they walked out of hospitals and onto picket lines after several years of falling pay and declining standards left the country’s nationalized health care system in a state of crisis.
As many as 100,000 members of the Royal College of Nursing (RCN) – the UK’s biggest nursing union – are taking industrial action in England, Wales and Northern Ireland, in the latest and most unprecedented of a wave of strikes that has swept Britain this winter. It is the largest strike in the RCN’s 106-year history.

But it comes after several years of hardship for employees of Britain’s National Health Service (NHS), a revered but beleaguered institution that is straining due to staffing shortfalls, sky-high demand and stretched funding.

“I went into nursing to care for patients, and over the years my capacity to provide the level of care my patients deserve has been compromised,” Andrea Mackay, who has worked as a nurse for seven years at a hospital in southwest England, told CNN on her reasons for striking Thursday.

“The reality is, every day, nurses across the UK are walking into understaffed hospitals,” Mackay said. “The NHS has been running on the compassion and goodwill of nurses for years ... It is unsustainable.”

“It’s about paying staff what they’re worth so they can pay the bills,” Jessie Collins, a pediatric nurse preparing to join the strike, told CNN, adding that staffing pressures have crippled the emergency department she regularly works in. “During one of my worst shifts I was the only nurse to 28 unwell children ... it’s not safe and we cannot deliver the care that these children need at times,” she said.

Pamela Jones, on the picket line outside Aintree University Hospital in Liverpool, told PA Media: “I’m striking today because I’ve been nursing for 32 years; within those 32 years the changes have been astronomical.

“I feel really sorry for the young girls who are now trying to get into the profession, they have to pay for their training. The public need to understand the pressures that everyone’s under. You’ve only got to come into A&E and see the queues, there’s no beds.

“We want to save our NHS, we don’t want it to go, and I think this is the way forward, it’s the only way we can put our point across. We don’t want to be here. I was really torn about striking because it’s not something I’ve ever, ever thought in my lifetime I’d ever had to do, but yet the government has pushed us to this.”

She added: “I hope the government listens, because none of us want to be here, we just want a fair pay rise.”

The strike is taking place on two days – Thursday and next Tuesday – and not every NHS Trust will take part. But it marks one of the most dramatic uses of industrial action in the 74-year history of the NHS, and has intensified debate over the state of Britain’s public services.

The RCN is calling for a pay rise of 5% above retail inflation, which on current figures amounts to a 19% hike, and for the government to fill a record number of staff vacancies that, it argues, is jeopardizing patient safety. Steve Barclay, the UK’s health secretary, told CNN in a statement earlier this week that their demand is “not affordable.”

The standoff follows years of disputes over the level of pay for NHS employees. Nurses’ pay dropped 1.2% every year between 2010 and 2017 once inflation was taken into account, according to the Health Foundation, a UK charity that campaigns for better health and health care. For the first three of those years, their pay was frozen.

The number of patients waiting for care has meanwhile sky-rocketed, a years-long trend that has been exacerbated by the pandemic.

A record 7.2 million people in England – more than one in eight residents – are currently waiting for treatment, according to the British Medical Association. Seven years ago, the figure was 3.3 million.

“I work alongside some amazing (nurses) who have come in early, left late, worked through breaks and lunch, agreed to come in on their days off for an overtime shift to make sure their patients are kept as safe as we can manage,” Mackay told CNN.

“I don’t have all the answers and I understand that there is a limit to the money available, but unless the government prioritize health, patient safety, (and) strengthening the workforce then the NHS is going to collapse,” she said.

The NHS, which is free at the point of care, forms a central part of Britain’s national psyche and third rail of the country’s politics. During the early weeks of the Covid-19 pandemic, thousands of Britons stood outside their homes to applaud NHS workers, in a weekly ritual championed by the government.

But that has since been criticized as an empty gesture by disgruntled employees, who say the government’s pay offers to staff have not represented the same spirit.

Earlier this year, the RCN rejected an offer by the government to increase nurses’ pay by a minimum of £1,400 ($1,707) a year, which amounted to an average rise of 4.3%, well below the rate of inflation.

“I have nursed patients who can remember life before the NHS. They know how precious it is because they have seen what went before,” Mackay said.

Labour leader Keir Starmer attacked Rishi Sunak on the strike during Prime Minister’s Questions on Wednesday, telling him that “the whole country would breathe a sigh of relief” if he halted the strike by striking a deal with the RCN.

The industrial action was a “a badge of shame for this government,” Starmer said.

Most of the nurses taking part in Thursday’s action will be striking for the first time in their lives. But they are joining workers across Britain’s public services in walking out of work and demanding increased pay and conditions, furthering a swelling tide of strikes unlike any seen in the UK for decades.

Employees on Britain’s railways, buses, highways and borders are taking industrial action this month, bringing various forms of travel essentially to a standstill. Teachers, postal workers, baggage handlers and paramedics are all also due to strike in December.

It has left the government scrambling to respond. Members of Britain’s armed forces were being trained to drive ambulances and firefight in the event of strike action, ministers said earlier this month. On Tuesday, the Police Federation said it opposed a request to have police officers drive ambulances.

And unions have threatened more action in the New Year when a cost-of-living crisis that has clouded Britain in recent months is expected to worsen still.

A total of 417,000 working days were lost to strikes in October, the most recent month for which figures are available, according to the Office for National Statistics (ONS). That is the highest number for any month since 2011.

The impact of those strikes has led parts of the British media to rekindle memories of the so-called Winter of Discontent in 1978 and 1979, when demonstrations brought the UK to a standstill – though this year’s level of industrial action constitutes a fraction of those months, where several million working days were lost.

Sunak has been accused by opposition parties of refusing to negotiate with unions in good faith, and not doing enough to prevent strikes from going ahead.

But the ongoing disputes are a thorny issue for both major parties. Labour – a party with strong historic links to trades unions – has been walking a tightrope, urging the government to do more but refusing to explicitly support the demands of picketers.
#COVID-19  #Covid