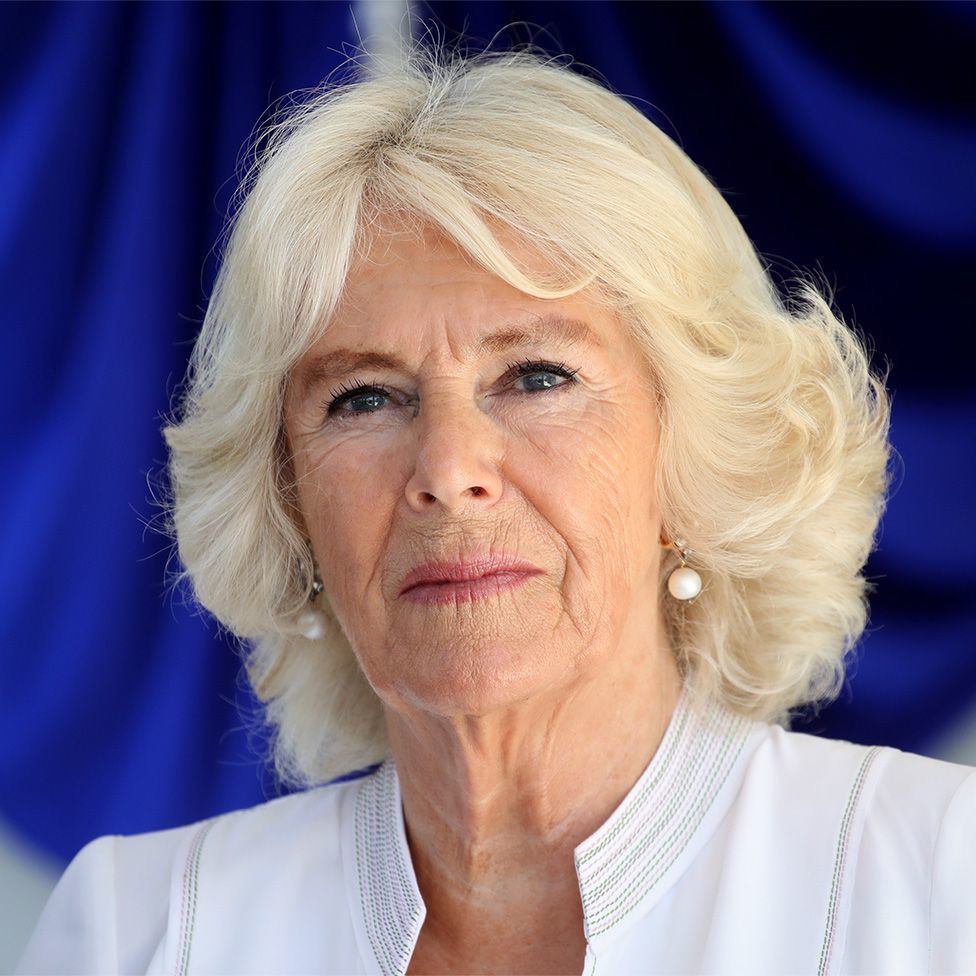 She is the love of Charles's life, his confidante since they were young and his wife of 17 years. And now, she is his Queen Consort.

The public has got used to seeing Camilla by her husband's side at key national and international events and celebrations, but as she has admitted, it has been far from easy.

Few women have been as publicly vilified as Camilla Parker Bowles. She was "the other woman" in the marriage break-up of the century, endlessly compared to Diana, Princess of Wales.

In choosing Charles, she upended her life. For years she was hounded by the press, her character and appearance relentlessly attacked. But she weathered the storm and gradually cemented her position as the most senior female member of the Royal Family. 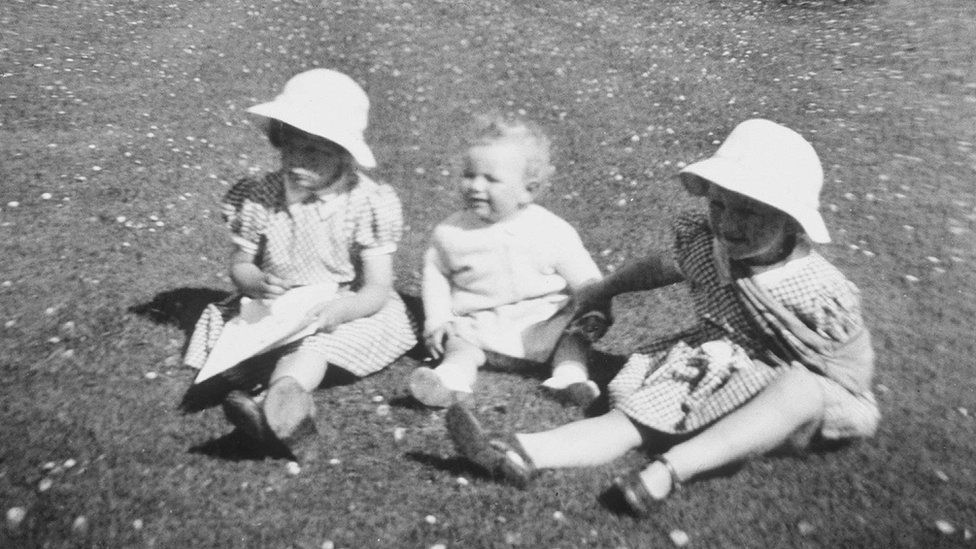 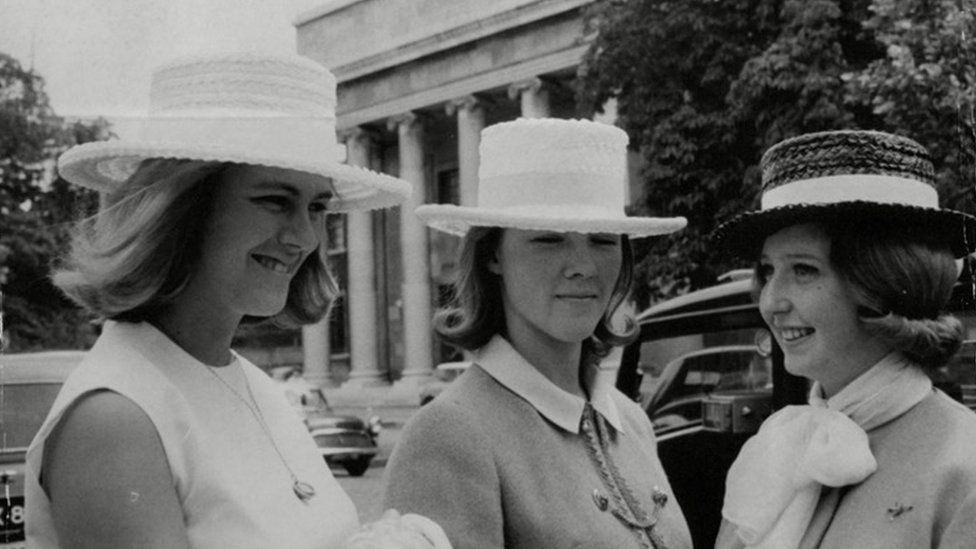 It has been quite a journey for the woman who, it is said, Prince Charles immediately fell for when they met in their early 20s.

Full acceptance from Queen Elizabeth II took time, but in her final years she was unequivocal in her support for Camilla. The new Queen may never achieve full acceptance from the public, but as she said herself, in an interview with Vogue magazine earlier this year: "I sort of rise above it and get on with it. You've got to get on with life."

Marrying the heir to the throne would not have been the future predicted for Camilla Rosemary Shand, who was born on 17 July 1947. Her family were upper-class, wealthy and well-connected, but definitely not royal.

She grew up in a close-knit, loving environment, playing with her brother and sister on a picturesque family estate in Sussex. Her father, Bruce Shand, a retired Army officer, liked to read her bedtime stories, and her mother, Rosalind, ferried the children to school, activities, and the beach. It was a very different childhood to that of Charles, who had long periods of time without his parents as they travelled the world.

A finishing school in Switzerland prepared Camilla for life as a debutante in London society. She was popular, and from the mid-60s she was in an on-off relationship with a Household Cavalry officer called Andrew Parker Bowles. 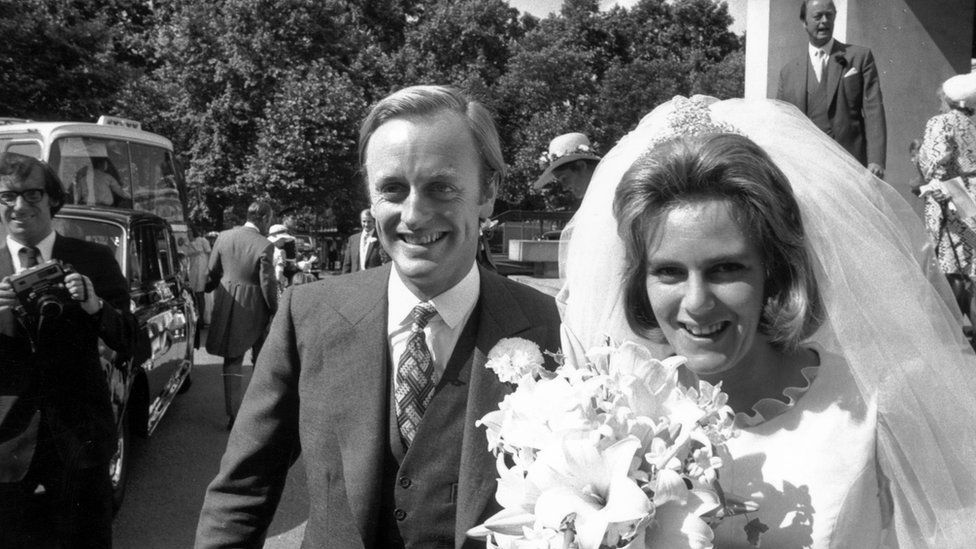 After years of an on-and-off relationship, Camilla married Andrew Parker Bowles in 1973

In the early 1970s she was introduced to the young Prince Charles. According to Jonathan Dimbleby, who wrote a biography of the prince, "she was affectionate, she was unassuming, and - with all the intensity of first love - he lost his heart to her almost at once".

But the timing was not right. Charles was still in his early 20s and pursuing a career in the Navy. He set off on an eight-month deployment overseas in late 1972. And while he was away, Andrew proposed to Camilla, and she accepted. Why not wait for Charles to ask? Friends have speculated she simply never saw herself as Queen material.

However spurned Charles might have felt, they continued to be a part of each other's lives. They moved in the same social circles, Charles and Andrew played polo together, and the couple asked Charles to be godfather to their first child, Tom. Photographs of Charles and Camilla at polo meets show a relaxed intimacy. 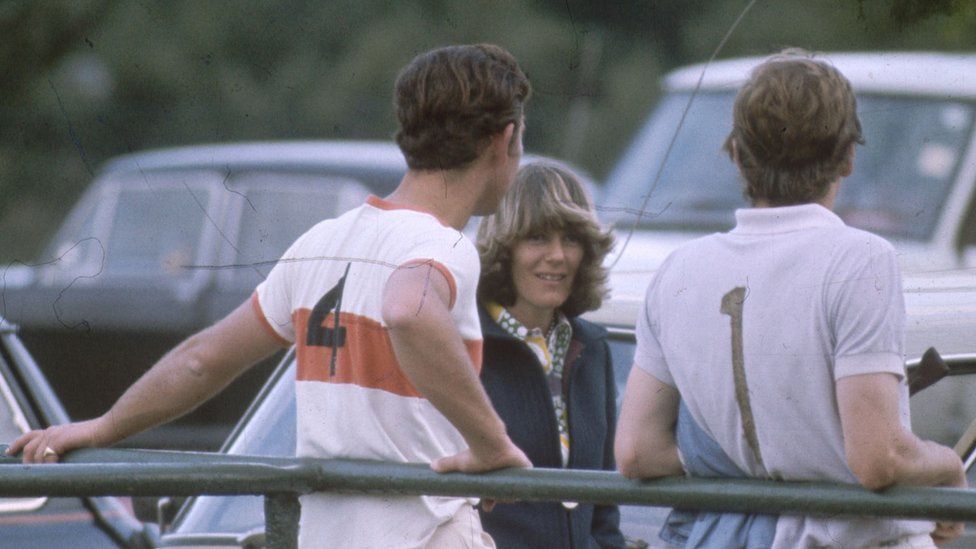 Charles, left, and Camilla were first pictured together in 1972 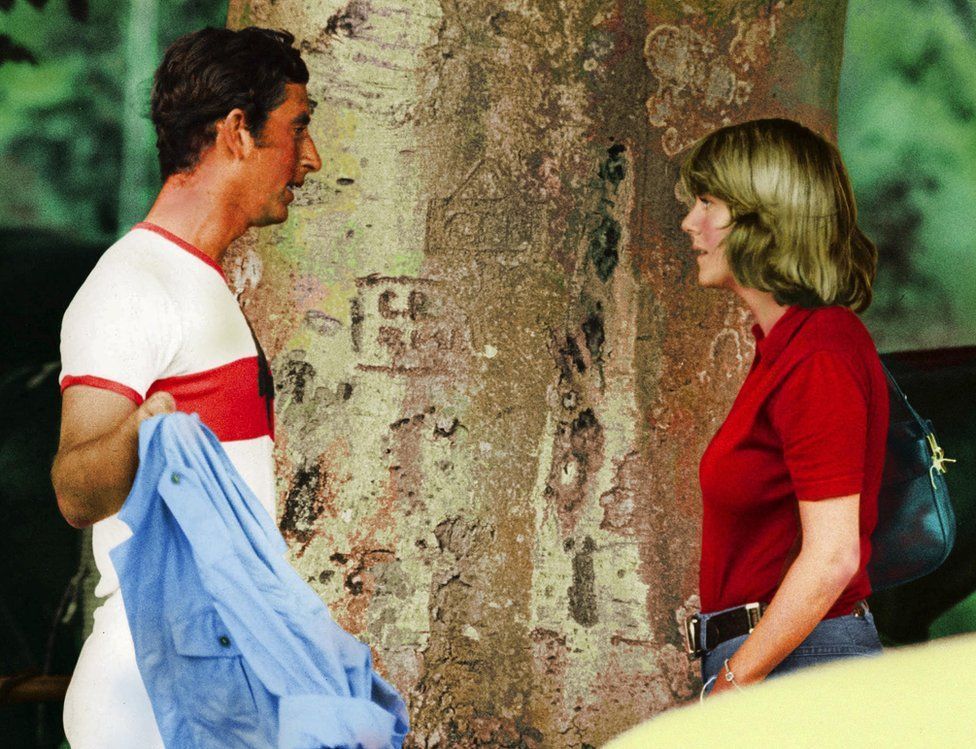 By the summer of 1981, Charles had met and proposed to the young Lady Diana Spencer. Still Camilla was a part of his life. In Diana: Her True Story, author Andrew Morton detailed how Diana almost called off the wedding two days before it was due to take place after finding a bracelet Charles had had made for Camilla engraved with the letters "F" and "G" - their pet names for each other were Fred and Gladys.

That Diana struggled with Camilla's relationship with her husband is without question. Charles insisted that they only rekindled their romance when his marriage had "irretrievably broken down". But as Diana so memorably stated in the now-discredited 1995 Panorama interview "there were three of us in this marriage".

As both Charles and Camilla's marriages deteriorated, some of the headlines were excruciating, perhaps none more so than the details of a late night phone call secretly recorded in 1989 and made public four years later. Charles's expressed wish to be Camilla's tampon made clear the level of intimacy between them. 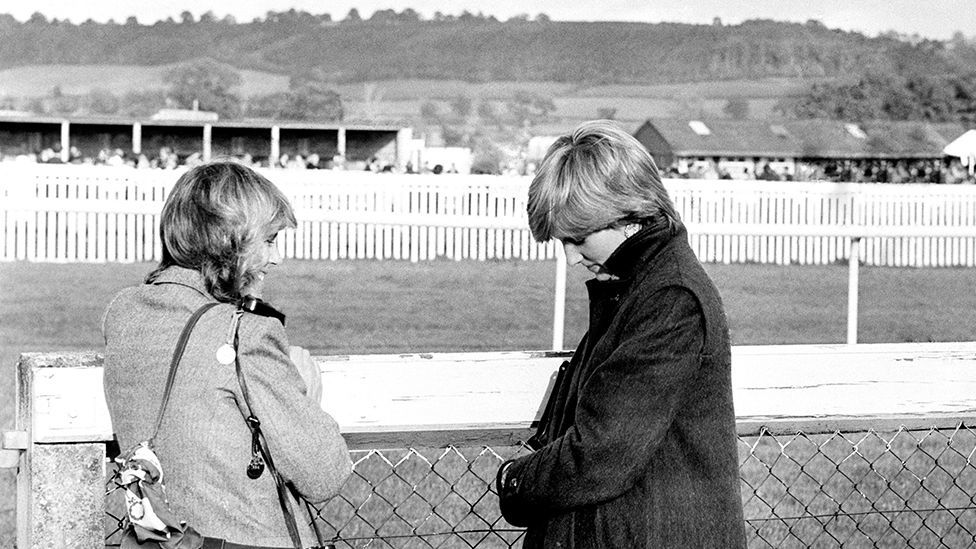 Camilla's divorce was finalised in 1995. Charles and Diana's marriage officially ended in 1996.

It is a mark of the strength of feeling Camilla had for Charles that she chose to be with him, despite the public hostility and disruption it caused to her own family, especially her two children Tom and Laura.

Tom Parker Bowles has spoken about the days when the paparazzi used to hide in bushes outside the family home in Wiltshire. "There is nothing anyone could say about our family that would offend us any more," he wrote in The Times newspaper in 2017, adding: "My mother is bullet-proof."

Of those days, Camilla said: "Nobody likes to be looked at all the time. You just have to find a way to live with it."

Finding a way to deal with the criticism became even more difficult in 1997 after Diana's death. Publicly, Charles focused on his sons William and Harry, and Camilla retreated out of view.  But their relationship continued.

Charles's position was that Camilla was non-negotiable in his life, and so began a carefully choreographed campaign to rehabilitate her in the public eye. It began with a late-night departure from the Ritz Hotel in 1999 where they had been celebrating Camilla's sister's 50th birthday. Six years later, they married in a small, civil ceremony at Windsor Guildhall. 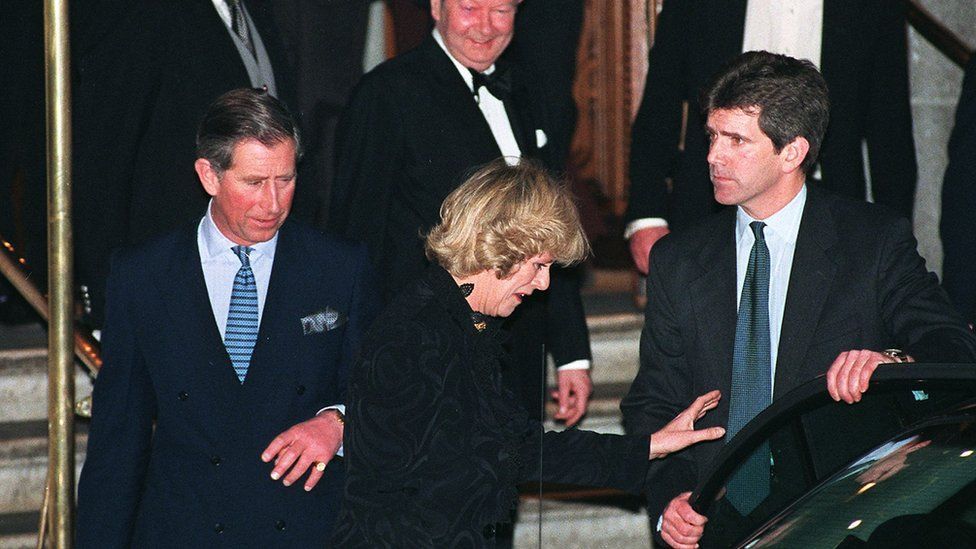 Any concerns the couple might have had that the crowd might react negatively to the newly-weds proved unfounded, as they were greeted by cheers and applause from well-wishers.

But for many years the debate continued over whether she would ever be known as Queen. While legally entitled to use the title, the official line had been that she would instead be known as Princess Consort, as a way to appease those who blamed her for the breakdown of Charles's marriage to Diana.

In the end, the matter was settled by the Queen, who said in 2022 that it was her "sincere wish that, when that time comes, Camilla will be known as Queen Consort". Here was the confirmation that Camilla had earned her place by Charles's side. Any public debate was effectively ended.

If the Queen was initially wary of Camilla, that must have been even more the case for Princes William and Harry. Both had to deal with the very public break-up of their parents' marriage, and then the death of their mother when William was 15 and Harry just 12. 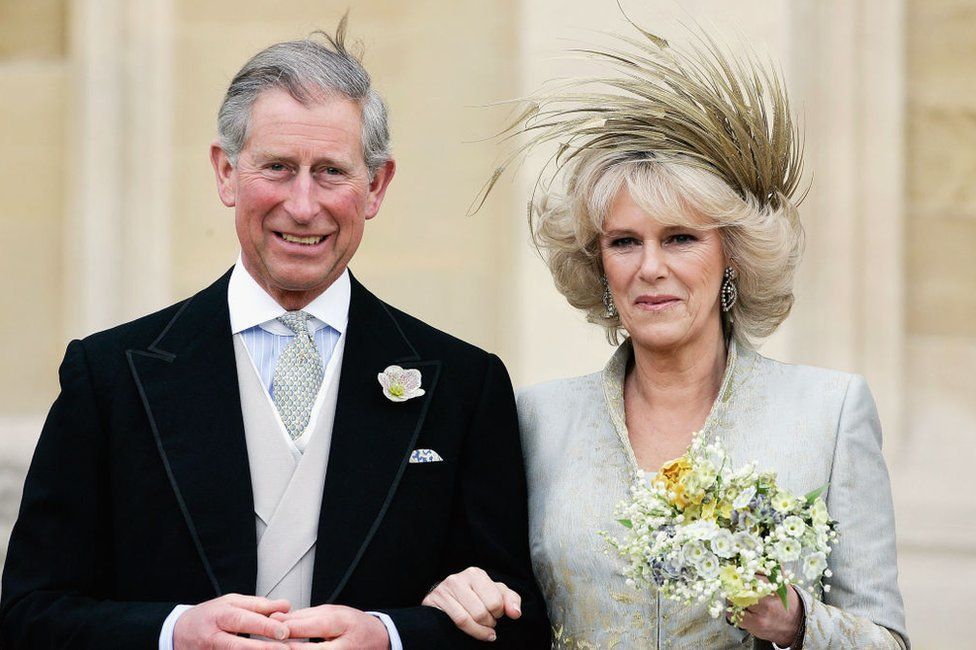 In 2005, a few months after their wedding, an almost 21-year-old Harry said Camilla was a "wonderful woman" who had made their father very happy.

"William and I love her to bits and get on really well with her."

Little has been said by either brother about their feelings for Camilla in the years since. However, watching the interactions and body language between William, his wife Catherine, and Camilla at public engagements - there is a warmth and familiarity which suggests relations, with the Cambridges at least, are good. 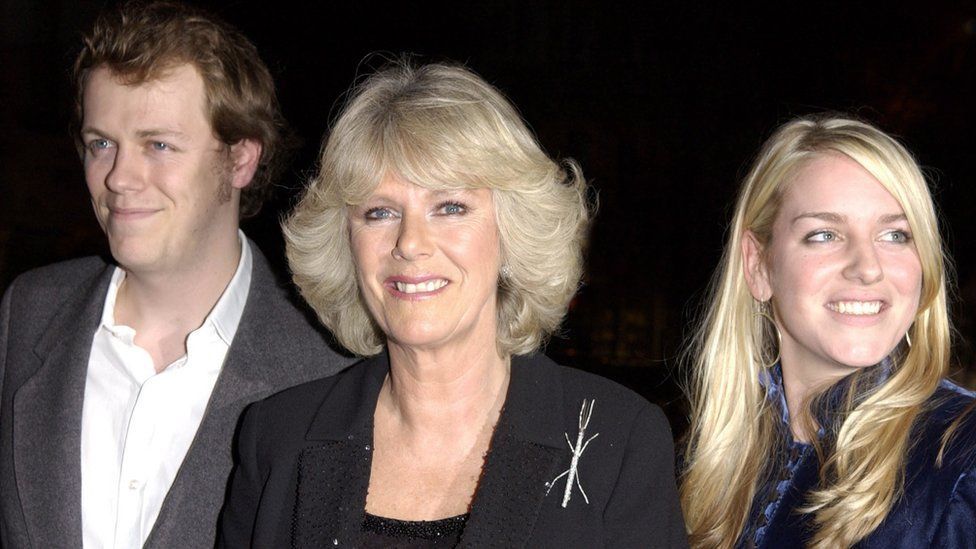 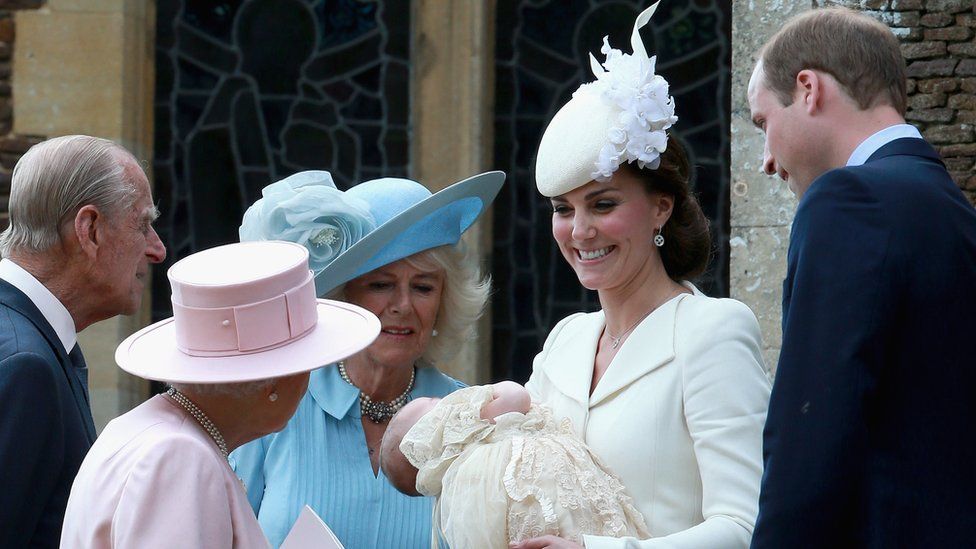 Now in her mid-70s, Camilla's life revolves around supporting her husband and her family. Her Windsor relations may generate the headlines, but away from the spotlight Camilla is also an enthusiastic grandmother of five. She has kept her Wiltshire home, Ray Mill House, where she escapes to relax.

"She has a very close and supportive family, and a close group of old friends," her nephew Ben Elliott told Vanity Fair magazine. "She adores her husband, children and grandchildren."

Camilla has also made her own mark in areas about which she feels passionate:

* raising awareness about osteoporosis, which afflicted her mother and grandmother


* pointing a spotlight on difficult subjects such as domestic abuse, rape and sexual violence

Perhaps because she came to royalty late in life, she seems almost embarrassed by the fuss that surrounds her.

While covering a charity reception at Clarence House, I spotted the duchess poking her head round the corner at the top of the sweeping staircase, checking everyone was ready. Happy that we were, she came down and gave an enthusiastic hug and kiss to the charity's chief executive.

During lockdown, the duchess spoke of her sadness at not being able to give her grandchildren a "huge hug". As restrictions eased, she clearly enjoyed being able to get back to her physically demonstrative self. 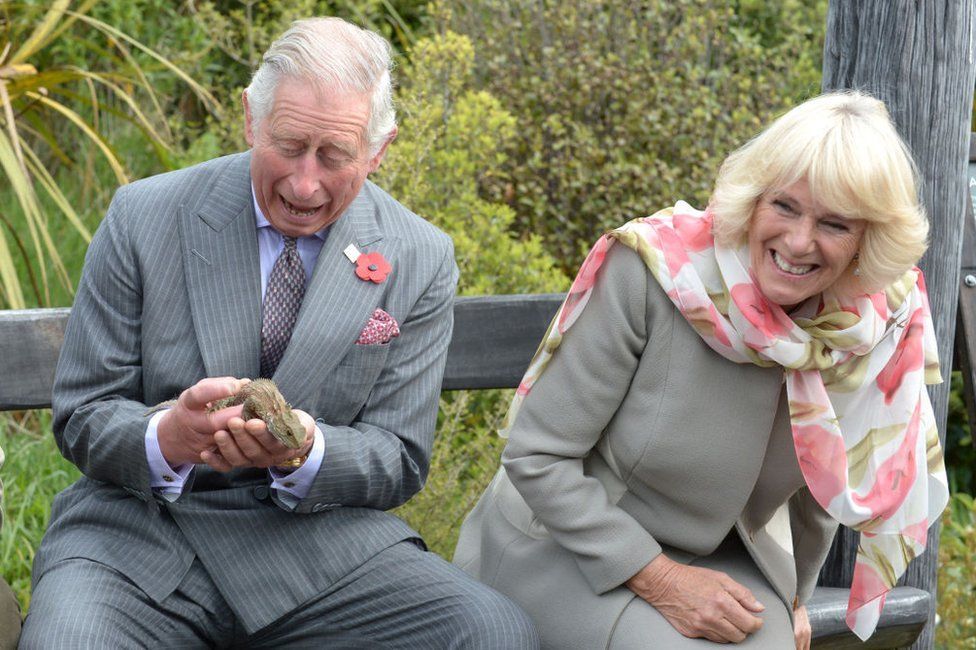 Charles and Camilla are regularly seen laughing together at public engagements

Watching her work a room, it is clear she can put people at their ease. She has made no secret of the fact she finds having to make speeches nerve-wracking, but she has grown in confidence over the years.

Charles and Camilla have now been married for 17 years. In public, their connection is obvious. A shared look, a laugh - rarely is there an event where at some point they do not appear to be sharing a private joke.

"They love and respect each other and laugh at the same thing," Mr Elliott told Vanity Fair.

They live lives of luxury but under the most intense scrutiny, and the pressure can be unrelenting.

"It's always nice to have somebody on your side," Prince Charles told broadcaster CNN in the run-up to their 10th wedding anniversary. "She is an enormous support and sees the funny side of life, thank God."

"Sometimes it's like ships passing in the night," she said of their life together, "but we always sit down together and have a cup of tea and discuss the day. We have a moment."

The role of king is a solitary one - and Charles's reluctance to give up Camilla is perhaps because he knew she was the only person who could provide the companionship he will need in the role he is taking on.