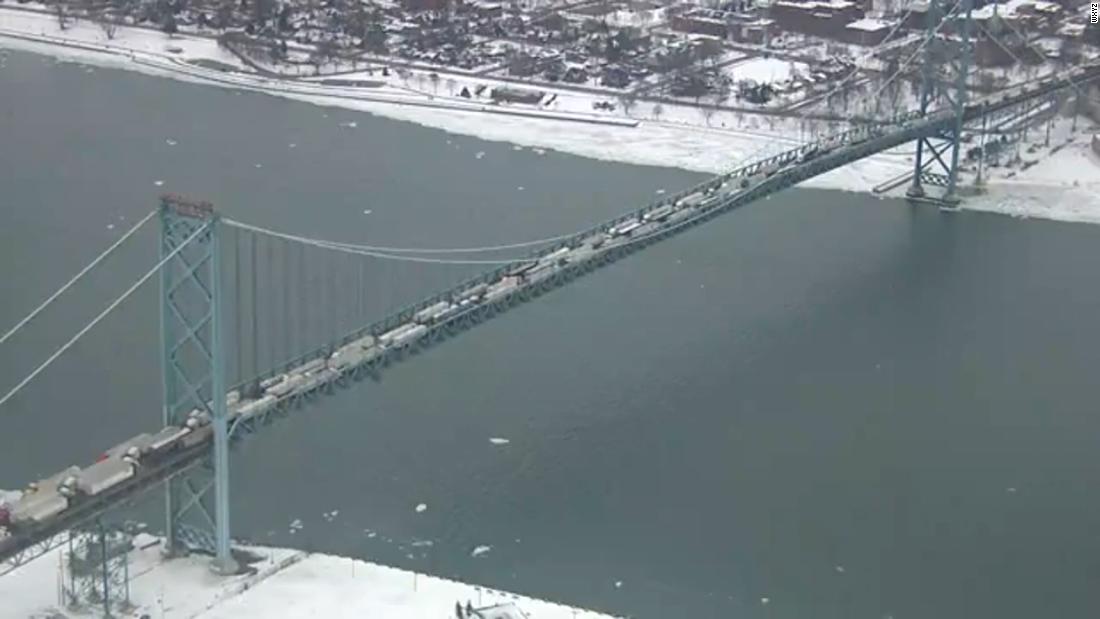 Canadian protesters have impeded access to the busiest international crossing in North America again Tuesday, escalating tensions as frustration over demonstrations against Covid-19 rules continues to roil the nation.

The bold move at the continent's busiest international crossing signals a ratcheting up of demonstrations that have rocked Canada and galvanized thousands against its leadership.

Prime Minister Justin Trudeau, emerging Monday from a weeklong isolation after testing positive for the coronavirus, echoed residents and officials aggravated by the demonstrations, which began January 29 as an objection to a vaccine mandate requiring truckers entering Canada to be fully vaccinated or face testing and quarantine requirements.

More protesters have since joined to rail against mask mandates, lockdowns, restrictions on gatherings and other efforts to stem the spread of Covid-19. Some have vowed not to leave until certain Covid-19 measures are rescinded, they've told CNN.

"Individuals are trying to blockade our economy, our democracy and our fellow citizens' daily lives. It has to stop," Trudeau said Monday at an emergency parliamentary debate in Ottawa.

Canada's capital city has endured widespread turmoil, including blaring horns on downtown streets and businesses forced to close temporarily. More than 60 criminal investigations are underway there, as claims of hate crimes, rock-throwing and property damage were reported, police said Sunday. At least 450 citations were issued over the weekend, they said.

On Tuesday, the Ottawa Police Service said 23 arrests have been made since the protests began on charges that include mischief, flight from police and menacing. More than 1,300 tickets have been issued for violations ranging from excessive noise and use of fireworks to driving a motor vehicle on a sidewalk.

Ottawa resident Zexi Li, 21, who lives within five blocks of Parliament Hill, filed a lawsuit calling for an end to the incessant honking. The suit said sound levels from the air and train horns are "dangerous and cause permanent damage to the human ear" and cause "significant mental distress, suffering and torment." A hearing is set for a week from Wednesday.

"We have been 100% full-out on this for the last 10 days straight, and we will not rest until it's done, but we need more help," Police Chief Peter Sloly said Monday, appealing to all levels of government and noting his department asked the mayor's office for a "significant increase" in resources. 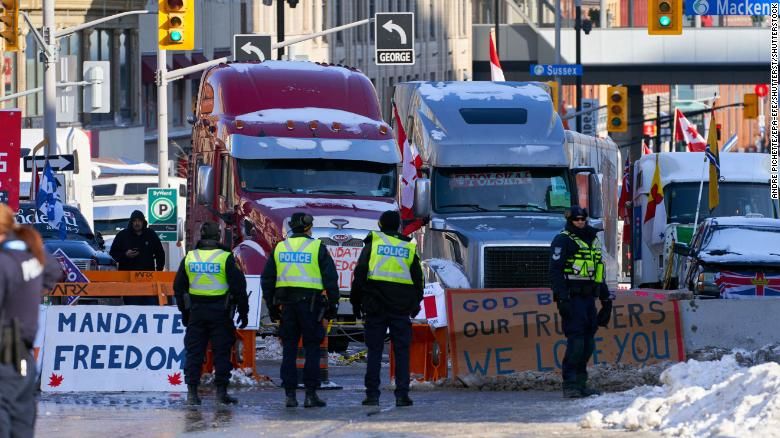 Police stand near protesters Monday after the mayor of Ottawa declared a state of emergency in the Canadian capital. A 10-day protest by truck drivers over Covid-19 restrictions has gridlocked its city center.

Many in Ottawa are at their "breaking point," Sloly said.

"This is crushing for those residents and their businesses. It has to stop, and we are doing everything we can possibly do to stop it," he said. "We need more help."

Protests notwithstanding, nearly 90% of Canada's truckers are fully vaccinated and eligible to cross the border, the Canadian government said. Demonstrators represent a "small, fringe minority," Trudeau said, and his government does not expect the vaccine mandate to significantly affect supply chains.

Just over 80% of Canadians in all are vaccinated, according to the Public Health Agency of Canada.

Bridge traffic backed up for miles

Police worked Monday to restore the orderly flow of traffic due to interruptions at the exit from the Ambassador Bridge onto Huron Church Road, Windsor Police said.

"Our officers continue to work hard to keep the flow of traffic moving along Huron Church Rd., as well as ensuring order and public safety. ... We encourage everyone to be patient and respectful," Windsor Police said on Twitter.

Windsor Police posted a photo online earlier in the day showing a long line of trucks appearing to be at a standstill. They also warned of travel delays and a high potential for traffic congestion, and asked "those involved not to endanger members of the public."

Access to the bridge from the US side of the border was closed, the Michigan Department of Transportation said Monday night.

"The freeway traffic trying to get across the bridge is backed up on multiple roadways and for miles," agency spokeswoman Diane Cross told CNN.

More than 40,000 commuters, tourists and truck drivers cross the Ambassador Bridge each day, according to its website. 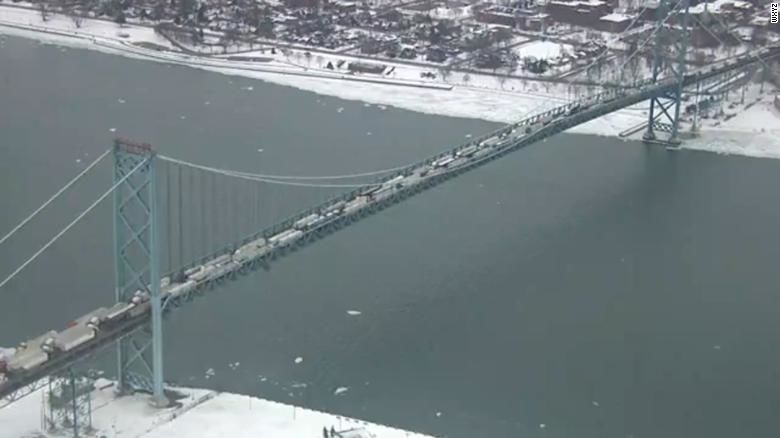 Ottawa Mayor Jim Watson has declared a state of emergency in response to the protests, and most businesses downtown have closed or reduced their hours because of the unrest.

"No officers are on days off, everyone has been working," Sloly said Monday. "We are stretched to the limit, but we are 100% committed to using everything we have to end this demonstration. We cannot do it alone.

"That's why I have been advocating for all three levels of government to bring whatever they can bring to bear on the permanent, sustainable, lawful, safe resolution of this demonstration."

With protesters parked in trucks right outside the building, Trudeau on Monday acknowledged they had a right to voice their concerns but said residents do not deserve to be harassed in their own neighborhoods.

Trudeau responded by saying most Canadians trust each other to do the right things when it comes to following science.

"This is the story of a country that got through this pandemic by being united, and a few people shouting and waving swastikas does not define who Canadians are," he said.