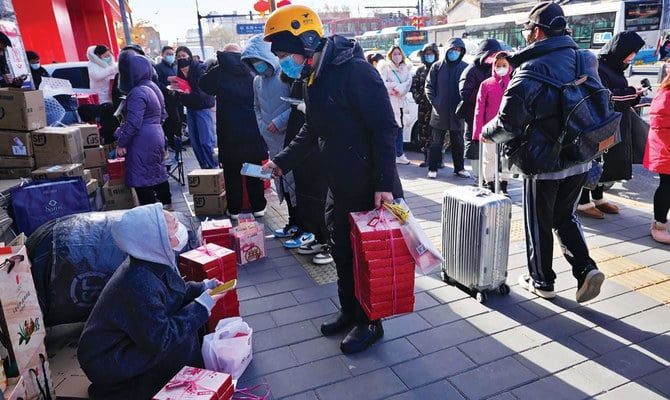 China’s economic growth fell to its second-lowest level in at least four decades last year under pressure from anti-virus controls and a real estate slump, but activity is reviving after restrictions that kept millions of people at home and sparked protests were lifted.
The world’s No. 2 economy grew by 3 percent in 2022, less than half of the previous year’s 8.1 percent rate, official data showed on Tuesday. That was the second-lowest annual rate since at least the 1970s after 2020, when growth fell to 2.4 percent at the start of the coronavirus disease pandemic.

China’s slump has hurt its trading partners by reducing demand for oil, food, consumer goods and other imports. A rebound would be a boost to global suppliers who face a growing risk of recession in Western economies.

Economic growth sank to 2.9 percent over a year earlier in the three months ending in December from the previous quarter’s 3.9 percent, the National Bureau of Statistics reported.

Consumer spending started to recover but still was weak in December after the government abruptly ended its “zero-COVID” controls.

While many analysts say a return to economic normality will be gradual as the impact of COVID weakens, some see the Lunar New Year as a welcome early consumption boost.

“Peak infections passed in major cities in January, and with the Spring Festival coming, tourism is back, and the signs of a recovery in consumption are obvious,” said Nie Wen, a Shanghai-based economist at the investment firm Hwabao Trust.

But with so many people on the move, health experts fear a deepening of the COVID outbreak, leaving the elderly in rural villages particularly vulnerable.

The Ministry of Transport has estimated the rush will see a total of 2.1 billion passenger trips nationwide between Jan. 7 and Feb. 15.

The holiday season has also sparked a revival in domestic air travel with more than 70,000 flights across China between Jan. 7-13, according to industry data reported by Shanghai Securities News on Monday. That is equivalent to more than 80 percent of the levels seen before the pandemic.


Didi Global’s Chinese ride-hailing app returned to some Android app stores on Tuesday, according to Reuters checks and a source with direct knowledge of the matter, signaling its emergence from around 1-1/2 years of regulatory troubles.

Didi has been awaiting approval to resume new user registrations and downloads of its 25 banned apps in China as a key step to return to normal business since its regulatory problems started in mid-2021.

The ride-hailer, launched in Beijing in 2012 and backed by prominent investors including Alibaba, Tencent and SoftBank Group, ran afoul of the powerful Cyberspace Administration of China regulator when in 2021 it pressed ahead with a US stock listing against the regulator’s wishes, sources previously
told Reuters.

Its 25 mobile apps were then ordered to be taken down from app stores, the registration of new users was suspended, and it was fined $1.2 billion over data-security breaches.
#Coronavirus  #COVID-19  #Alibaba  #Covid