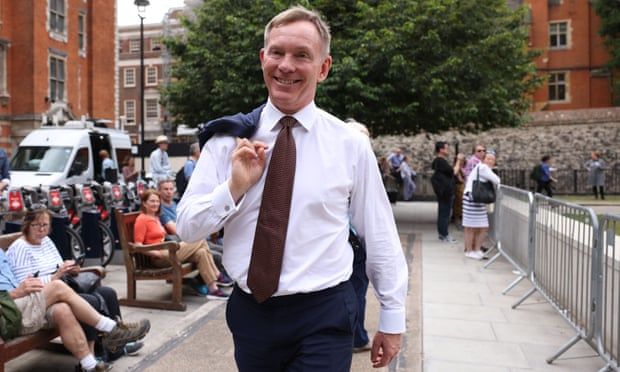 Chris Bryant to say sorry to billionaire over money-laundering claims

Labour MP will make court apology to financier Christopher Chandler over Commons comments he later tweeted
The Labour MP Chris Bryant is to make a formal court apology to a billionaire financier he accused in parliament of money laundering, after being sued for repeating the claims in a tweeted letter.

In a highly unusual legal case, Bryant was taken to court by Christopher Chandler, a New Zealand-born investor and co-founder of a London-based thinktank, over comments initially made during a debate in the House of Commons in 2018, during which another MP accused Chandler of links to Russian intelligence

While MPs are protected by parliamentary privilege for what they say in the Commons chamber, meaning they cannot be sued, in March this year Bryant sent a tweet that included a letter in which he quoted the comments, prompting Chandler to take action.

Bryant has not conceded his words were libellous, but a statement on his behalf to be read in court on Thursday accepts the claims about Chandler have “subsequently been disproved”. He has agreed to pay £1,000 to the UN’s Ukraine relief fund.

Chandler’s lawyers say it is the first time a sitting MP has been obliged to make such a statement based on something said in the Commons, although constitutional experts note that privilege is generally understood to no longer apply if the words are repeated elsewhere.

The financier, whose Dubai-based investment firm founded the Legatum Institute thinktank, said he was pleased that Bryant had rescinded what he called “bizarre and outrageous lies”.

Chandler has called for people against whom claims are made in parliament to be given a right of reply, and for individual MPs to be allowed to amend parliamentary records if something they say is found to be false.

The saga began in May 2018 during a debate about sanctions and money laundering. Bob Seely, the Conservative MP who is a leading backbench voice on Russian affairs, named Chandler as being of interest to French officials “on suspicion of … working for the Russian intelligence services”.

Other MPs named Chandler, among them Bryant. The MP for Rhondda said he had seen the same documents as Seely, claiming that these included “an allegation of money laundering”.

Because of parliamentary privilege, Chandler was unable to take action until Bryant tweeted a letter he had sent to Liz Truss, the foreign secretary, about sanctions against Russia, which directly quoted what he had said about the businessman in the Commons.

According to a statement released on behalf of Chandler, the claims of money laundering and links to Russian intelligence were investigated by Richard Walton, a retired police officer who formerly headed the Metropolitan police’s counter-terrorism command, and were found to have “no basis whatsoever”.

Chandler said he was “grateful to Mr Bryant for not opposing this long overdue correction of the public record”, adding: “After four long years, we are delighted to be able to put these bizarre and outrageous lies behind us.”

In a statement, Bryant said the statement repeated what he had said in May this year during a debate about foreign lobbying. He added: “While I do not accept that what I published was libellous I am happy for the record to be set straight.”