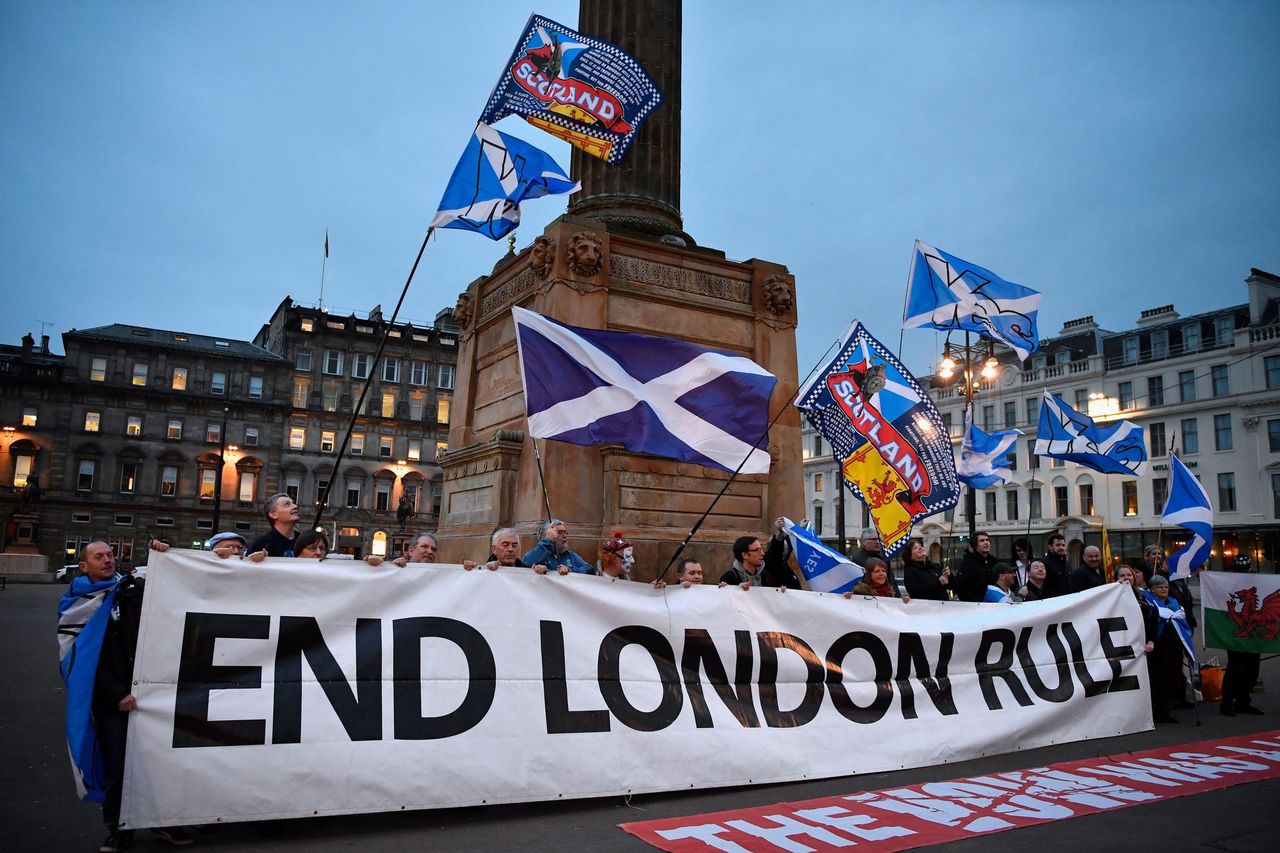 Democracy should be only in China’s Hong Kong, not on in UK’s’ Scotland: Sunak government threatens to block Scottish gender recognition law

Rishi Sunak is threatening to block a new law that would make Scotland the first part of the UK to introduce a self-identification system for people who want to change gender. In other words: the unelected British prime minister criticizing China for undermining democracy in Hong Kong, while doing just the same against the colonial territory of Scotland…

Rishi is not Scottish, so its non of his business what laws the Scottish people want to adopt or not. It’s about time to allow Scotland to become a democracy, for a change, and hopefully one day also UK will become a real and not fake democracy.
In a significant escalation that brings tensions around transgender rights into the constitutional arena, Westminster made clear it would consider a “nuclear option” of blocking the bill from going for royal assent, a move that would enrage supporters of the changes and nationalists.

The Scottish government pledged to “vigorously contest” any such intervention.

The first minister and SNP leader, Nicola Sturgeon, called Sunak and his cabinet “democracy deniers” after the supreme court ruled in October that Holyrood could not legally hold another independence referendum without Westminster’s approval. The ruling has resulted in a polling boost for independence over the last month.

The Scottish government hailed what it called “a historic day for equality” after a vote on Thursday afternoon in which MSPs overwhelmingly backed plans to make it easier and less intrusive for individuals to legally change their gender, and to extend the streamlined system for obtaining a gender recognition certificate (GRC) to 16- and 17-year-olds.

But immediately after the 86-39 vote, which followed three days of intense and at times emotional debate at Holyrood, the Scottish secretary, Alister Jack, said: “We share the concerns that many people have regarding certain aspects of this bill, and in particular the safety issues for women and children.

“We will look closely at that, and also the ramifications for the 2010 Equality Act and other UK-wide legislation, in the coming weeks – up to and including a section 35 order stopping the bill going for royal assent if necessary.”

The women and equalities minister, Kemi Badenoch, who met her Scottish government counterpart, Shona Robison, on Monday to discuss the bill, said following the vote that the Scottish government had “not addressed the full implications of their bill – especially on the lives of women and girls”.

She added: “The UK government is now looking at provisions that can prompt reconsideration and allow MSPs to address these issues.”

While gender recognition is a devolved matter, equalities legislation – which the new law will interact with – is reserved to Westminster.

Jack’s intervention follows UK government briefings in the run-up to the vote that the new law would create “legal chaos” and result in “gender tourism” across the border with England.

Section 35 of the Scotland Act allows the Scottish secretary to make an order prohibiting Holyrood’s presiding officer from submitting a bill for royal assent if they have reasonable grounds to believe it would have an adverse effect on the operation of the law as it applies to reserved matters.

It is almost certain that such a move would be challenged by the Scottish government, either by judicial review or a direct reference to the supreme court, resulting in the second legal battle between the two governments in recent months.

Westminster government law officers will further study the implications of the bill before any decision is made on the next step, with Jack’s threat to block royal assent seen as not inevitable but very much possible.

“That’s the nuclear option, if you like,” one UK government source said. “The ideal, of course, is that we can point out to the Scottish government all the constitutional issues the bill creates as it stands, and they can amend it before it’s fully enacted. But we’re looking very seriously at all possibilities.”

Immediately after the vote, a spokesperson for the Equality and Human Rights Commission called on the UK government to provide clarity on whether Scottish GRCs would be recognised in the rest of the UK.

The constitutional dimension will amplify tensions around the bill, over which there was the biggest SNP backbench revolt in the party’s 15 years in power. As a mark of the tensions, the debate was disrupted minutes before the final vote by protesters in the public gallery.

Nine SNP MSPs voted against their government, including Ash Regan, a former minister who quit in protest at a previous vote, but the bill passed comfortably with support from the Scottish Greens, Labour and the Scottish Liberal Democrats. Two Labour members – who were whipped to vote in favour – also rebelled, while three Tories, who were allowed a free vote, supported it.

The bill passed in a specially extended session, six years after it was first mooted by Sturgeon, who has been a consistent and passionate supporter of the change. The bill followed two of the largest public consultations in the history of the Scottish parliament.

Proposing the final version of the bill to parliament, Robison insisted that applying for a GRC under the new system would continue to be “a substantial and significant legal process”, with safeguards strengthened during the passage of the bill, and she said the bill “doesn’t change public policy … around provision of single-sex spaces and services”.

She told MSPs: “Trans rights are not in competition with women’s rights and, as so often before, we can improve things for everyone when those discriminated against act as allies not opponents.”

But the Scottish Conservatives’ equalities spokesperson, Rachael Hamilton, told Robison that her government had not brought the people of Scotland with them, and that “in the rush to make the process a little easier for trans people, the government is making it easier for criminal men to attack women”.

During the third-stage amendment process, which ran to two marathon sessions ending after midnight on Tuesday and Wednesday this week, Holyrood witnessed an unprecedented level of cross-party collaboration as members moved to address concerns about abusive males taking advantage of the new system.

Vic Valentine, the manager of Scottish Trans, said the “simple but important” changes would allow trans people to live “with the dignity and recognition that everyone deserves”.

They added: “Trans people across Scotland today will be feeling pleased and relieved that this bill has passed, after many years of difficult public debate that has often felt like people are talking about us and not to us.”