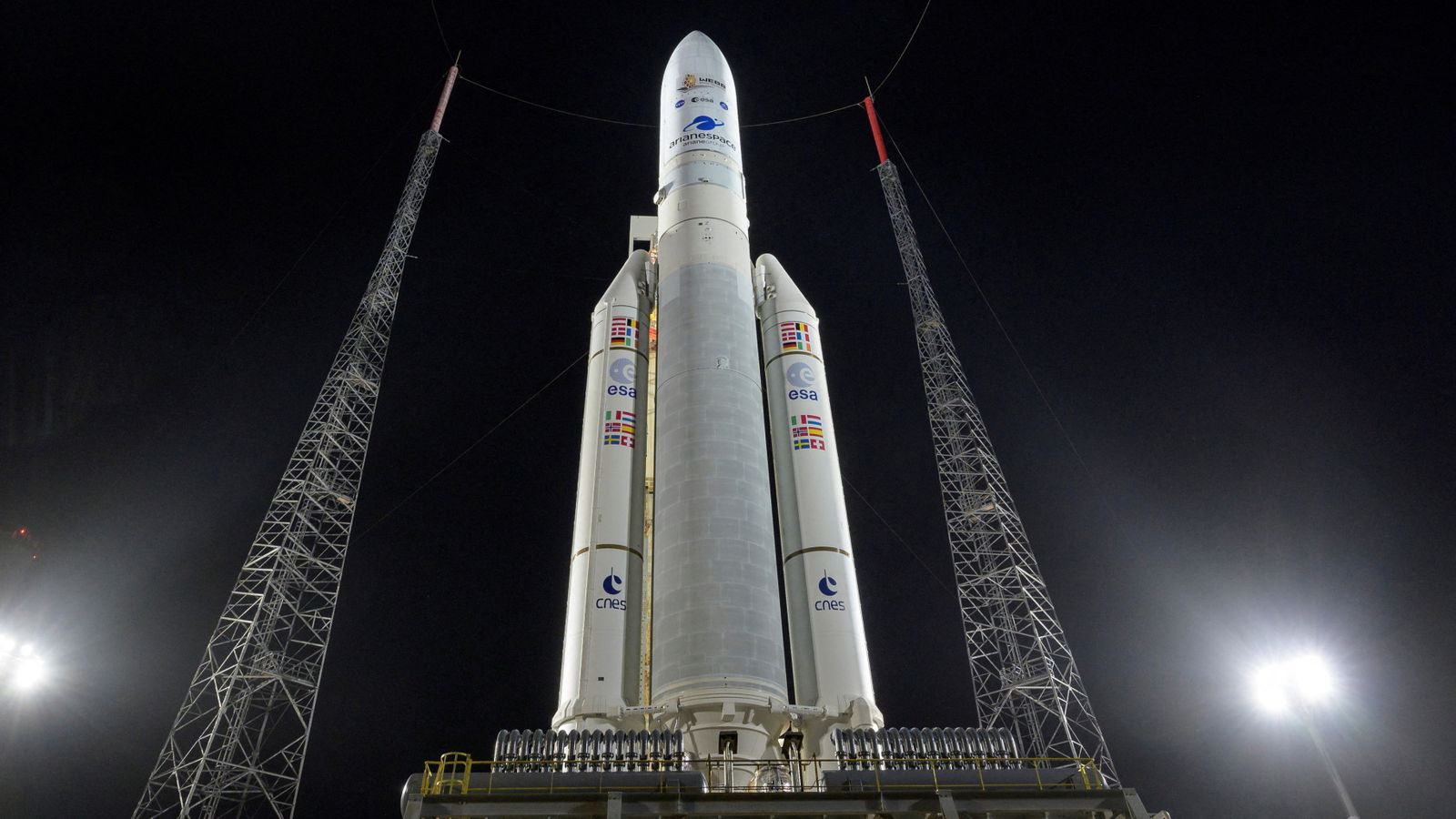 Do aliens exist? The key mysteries that could be unlocked after the James Webb telescope launched

The world's most powerful telescope is set to profoundly transform scientists' understanding of the universe and our place in it.

Scientists say a "new era of astronomy" could be brought in after the launch of the James Webb telescope.

The device is expected to profoundly transform scientists' understanding of the universe and our place in it.

NASA, which produced the $10bn infrared telescope in partnership with the European and Canadian space agencies, has hailed it as the premiere space-science observatory of the next decade. 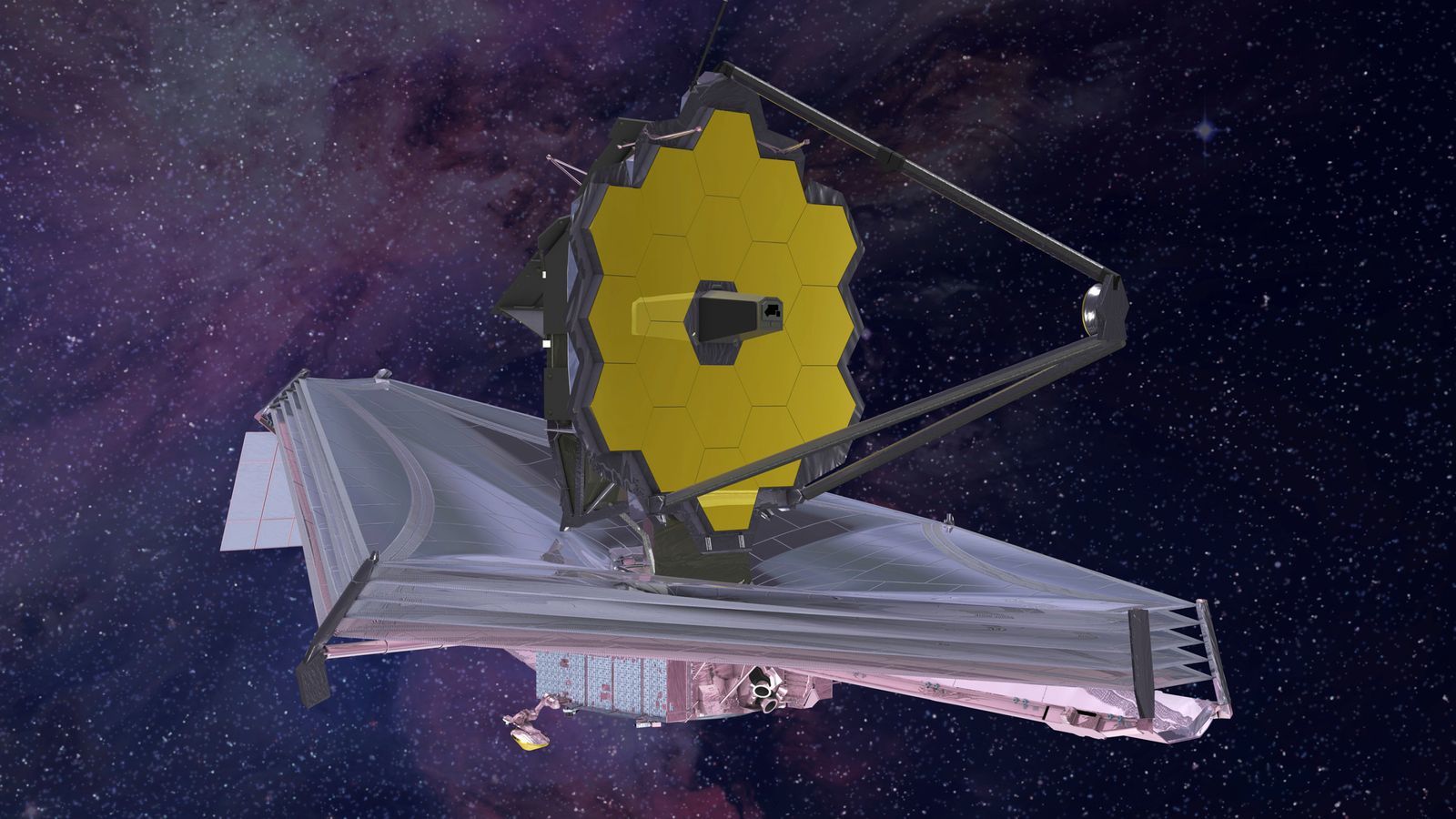 An artist's rendering of what the telescope would look like in space.

What can the James Webb telescope do?

The instrument will give humankind its first glimpse of the infant universe as it existed when the earliest galaxies are believed to have formed.

A replacement for the Hubble telescope, Webb will be able to view the cosmos just 100 million years after the Big Bang, the theoretical flashpoint that led to the expansion of the universe 13.8 billion years ago.

By comparison, Hubble can only see back to about 400 million years following the Big Bang.

Astronomers want to use Webb to study super-massive black holes believed to occupy the centers of distant galaxies.

Cosmologists will work to map the dark matter around galaxies to reveal more about the mysterious substance thought to make up most of the universe. 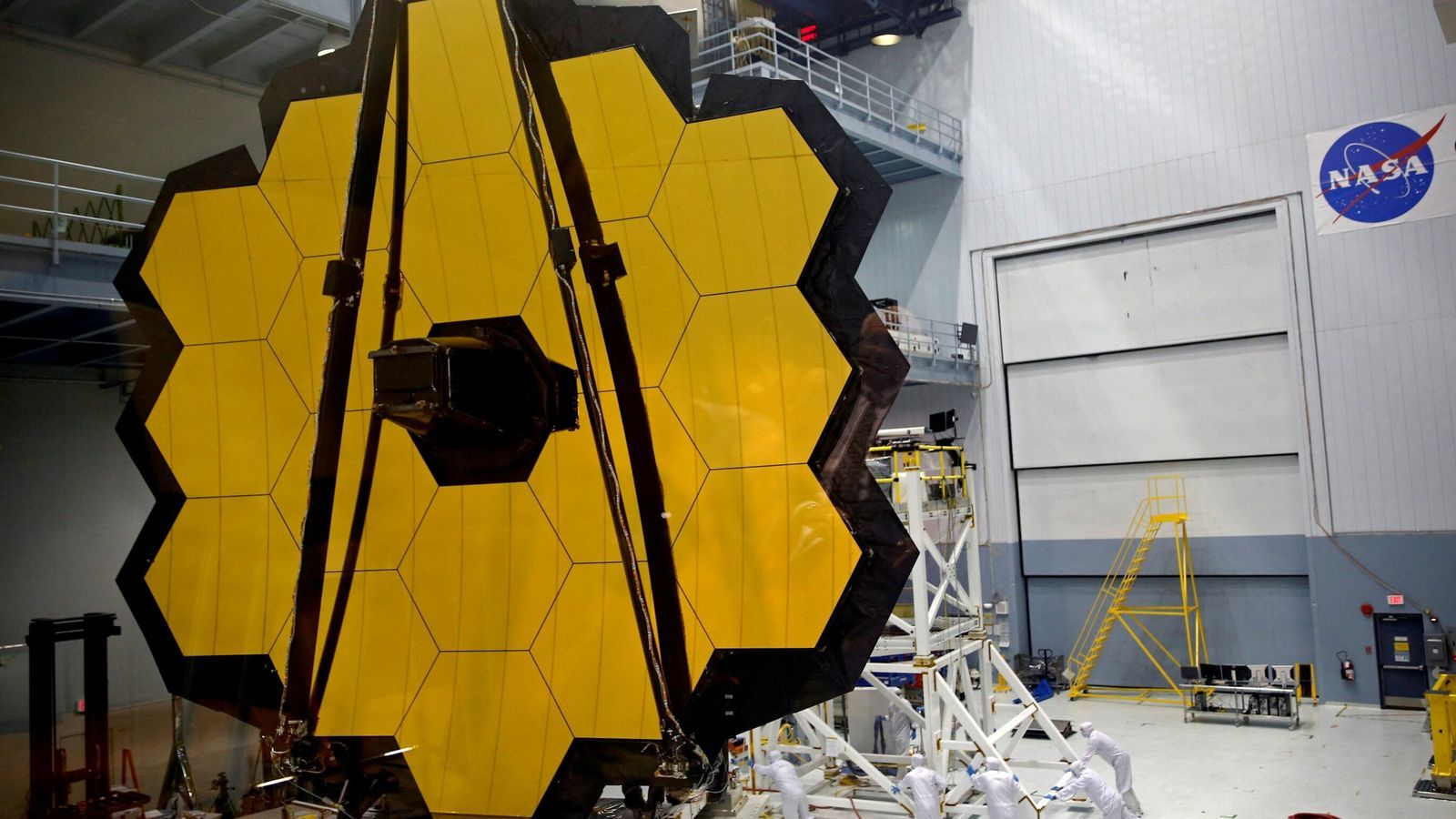 Could the telescope find aliens?

The space observatory will also investigate whether planets outside our own solar system may be suitable for life.

Cameras on the telescope will take images of other planets to look for the presence of water and other hints of life in the atmosphere.

Professor Martin Barstow, a scientist who helped develop the device, said it could reveal the existence of extra-terrestrial life forms in space.

"We will learn about the origins of the universe and how life came about and possibly, although we can't guarantee, about other life in our galaxy as well," he said.

He described the launch as "the beginning of a new era in astronomy". 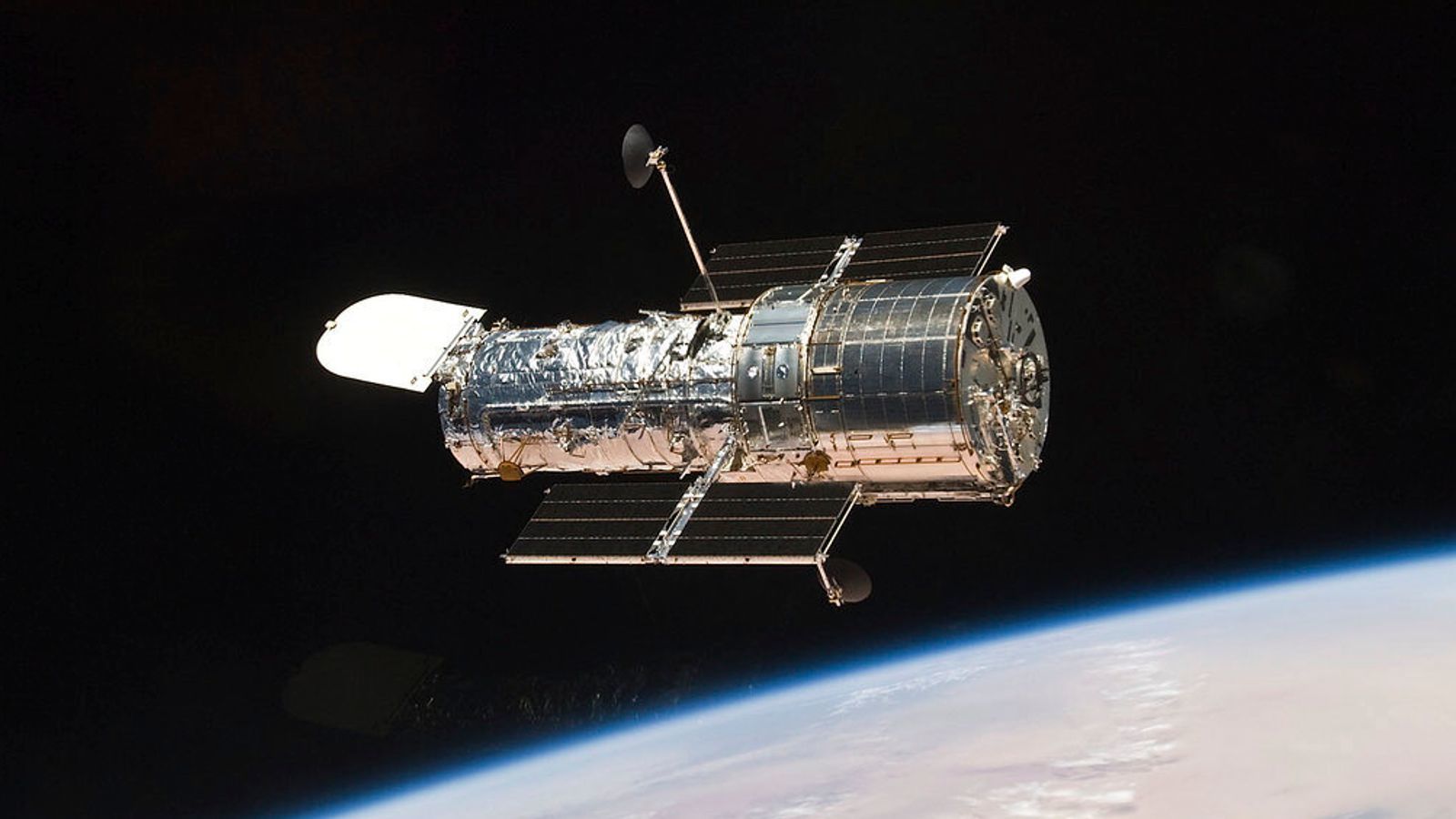 The Hubble telescope orbiting the Earth.

Named after NASA's chief during most of the agency's formative decade of the 1960s, Webb is about 100 times more sensitive than Hubble.

While Hubble operated mainly at optical and ultraviolet wavelengths, Webb will be able to see the cosmos in the infrared spectrum, peering through clouds of gas and dust where stars are being born.

The new telescope's primary mirror has a much bigger light-collecting area that allows it to observe objects at greater distances. 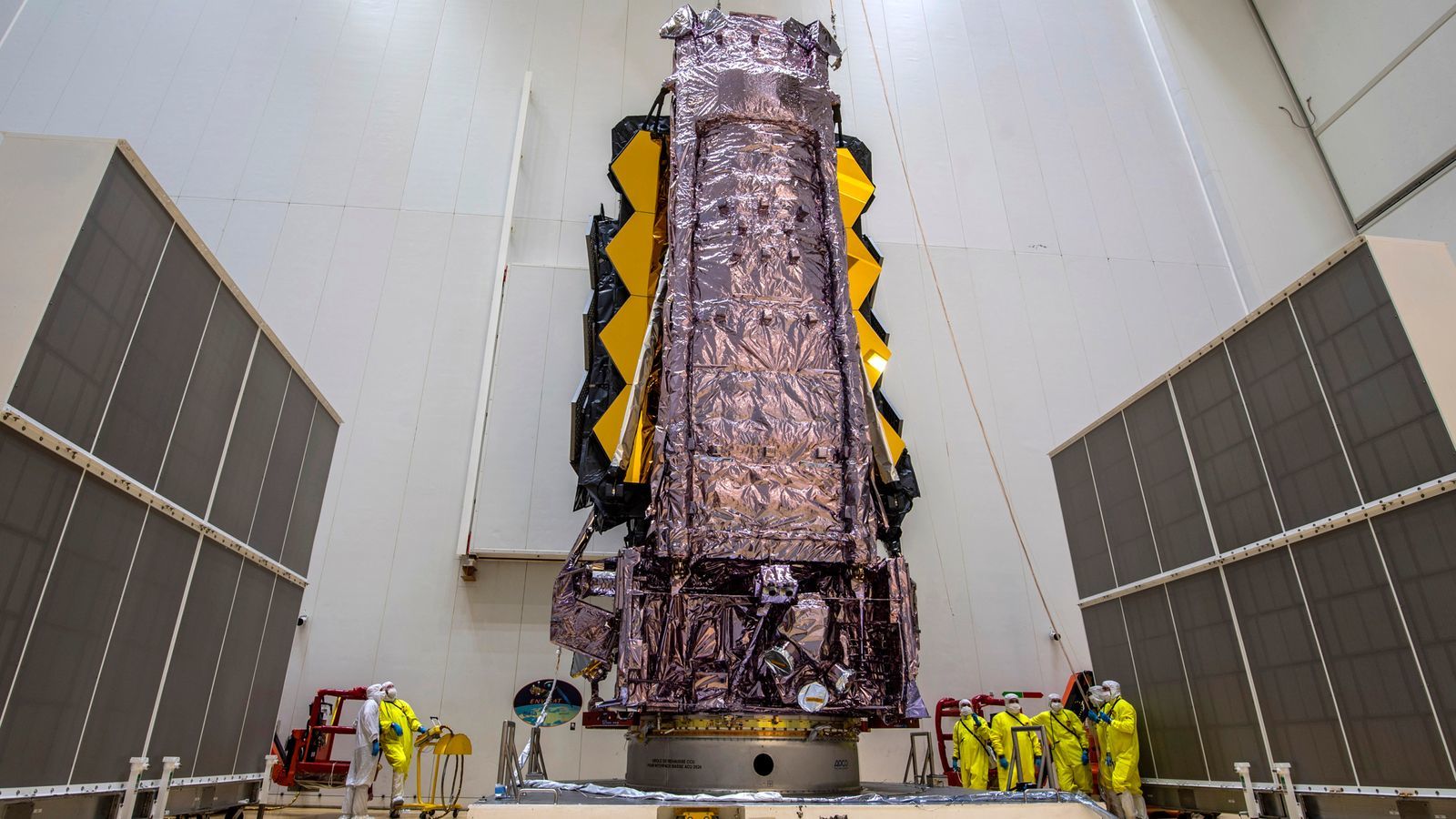 The telescope being secured on top of the Ariane 5 rocket.

What happens after launch?

The Webb telescope will spend another month reaching its destination in solar orbit - about 1 million miles from the Earth and about four times farther away than the moon. 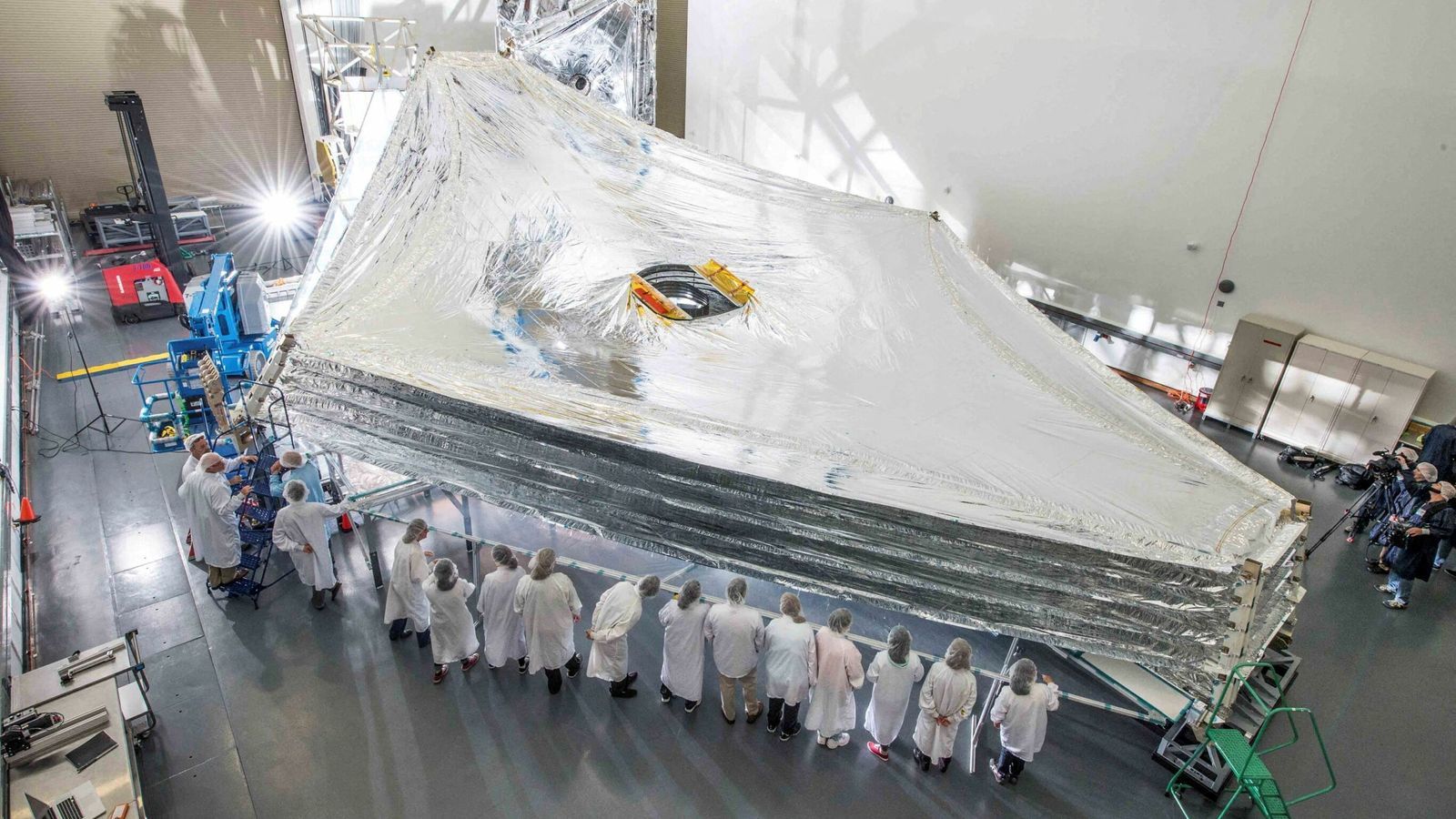 The Sunshield test unit for the James Webb telescope

The device's special orbital path will keep it constantly aligned with the Earth and its trajectory around the sun.

After about six months of alignment and the calibration of Webb's mirrors and instruments, the telescope's operation will be managed from the Space Telescope Science Institute in Baltimore.