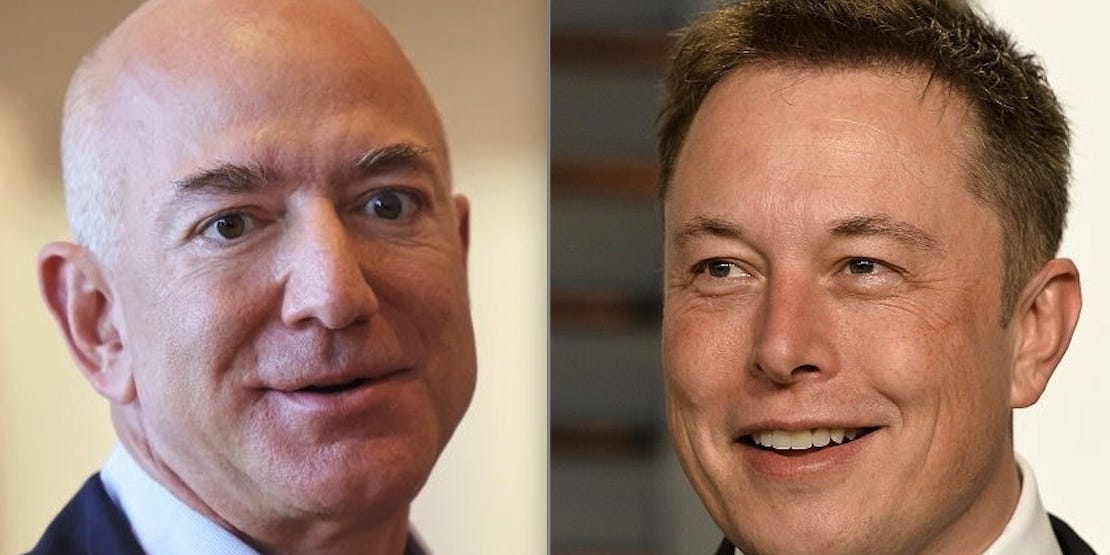 Musk and Bezos, who both run rocket companies, have been rivals for years — and Musk had booted him off the top spot as the world's richest person.
Elon Musk's beef with Jeff Bezos continues.

Responding to a tweet suggesting the Amazon founder "copies" every business move he makes, Musk said, apparently sarcastically: "Maybe it's a coincidence."

Musk was responding to a tweet from Kim Dotcom, the New Zealand-based German internet entrepreneur who has been fighting extradition to the US for the better part of two decades for charges relating to his file-sharing site Megaupload.com. Dotcom is prolific on Twitter and regularly interacts with Musk on the platform.

Musk has been feuding with Jeff Bezos for some 15 years and regularly accuses him of being a copycat. The pair have overlapping interests and often trade places as the world's richest person. Musk currently sits at number two, behind the French luxury tycoon Bernard Arnault, while Bezos is fifth, per Bloomberg's Billionaire Index.

More recently, Bezos backed Synchron, a company that focuses on finding ways to enable people to control computers with their minds. Alongside Bill Gates and other investors, the startup received $75 million in funding, part of it from Bezos Expeditions, Bloomberg reported. Musk, meanwhile, is the founder of the neural-interface firm Neuralink, which is trying to develop a device that could be embedded in a person's brain to record brain activity and potentially stimulate it.

The two compete most intensely in the commercial-space scene, though it's debatable that Bezos "copied" Musk here. The Amazon founder has long had an interest in space exploration, starting up the spaceflight firm Blue Origin in 2000. Musk founded his own commercial-space firm, SpaceX, two years later.

The two firms have clashed over lawsuits, patents, and rocket launches over the years.

In 2013, Blue Origin and United Launch Alliance filed a formal protest after SpaceX tried to get exclusive use of a NASA launchpad. Musk said the move was a "phony blocking tactic" and told Space News that Blue Origin had "not yet succeeded in creating a reliable suborbital spacecraft, despite spending over 10 years in development." NASA ultimately sided with SpaceX.

Musk, 51, did appear to compliment his rival in an interview with The New York Times in 2020 but also implied that Bezos was too old to make progress on space travel, though there's only a seven-year age gap between the two tech moguls.

On Tuesday, insiders told Bloomberg that SpaceX was offering to sell shares at a price that would raise the closely held company's valuation to about $140 billion. Blue Origin remains privately held.