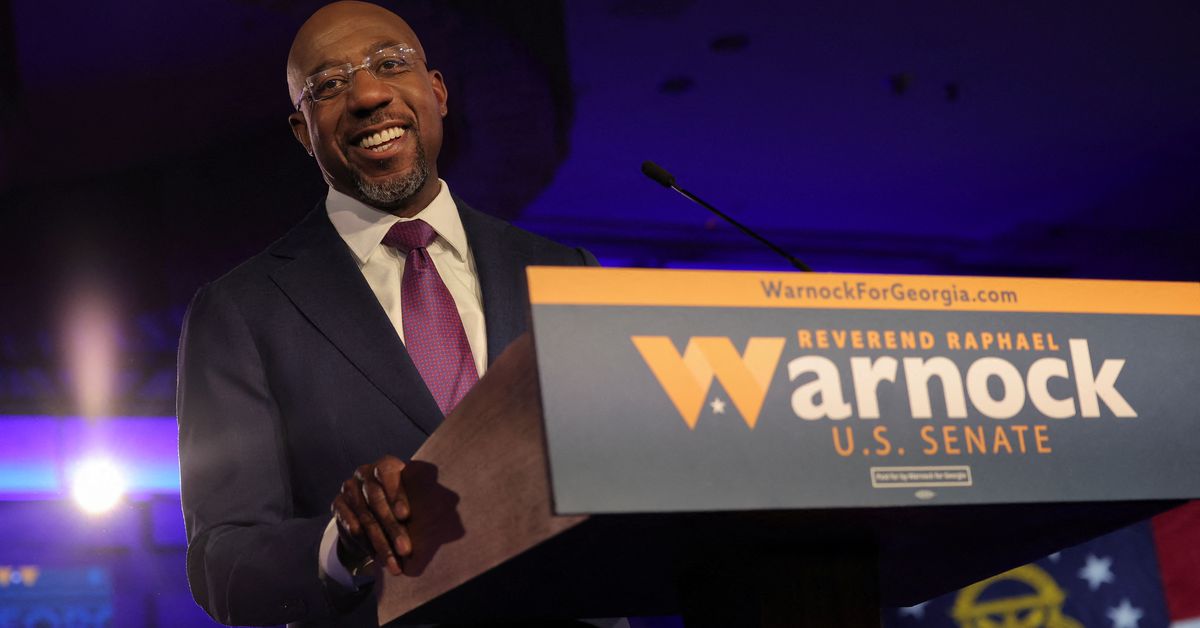 Democrat Raphael Warnock won re-election to the U.S. Senate in a hard-fought Georgia runoff on Tuesday, strengthening his party's razor-thin majority as he fought off a challenge by Republican former football star Herschel Walker.
Warnock's projected victory was narrow. With 99% of the estimated vote counted, he led Walker by 50.8% to 49.2%, according to Edison Research.

The result cements Georgia as a battleground state certain to play a prominent role in the 2024 presidential election. Democrats have now won three Senate races in the past two years in the former Republican stronghold, and Democratic President Joe Biden carried the state in 2020.

"Let's celebrate for a little while on this mountain. Let's dance because we deserve it. But tomorrow we go back down into the valley to do the work," Warnock, a Baptist preacher, told a cheering crowd of supporters.

Walker's defeat is also a setback for Donald Trump as he seeks the Republican nomination to run for the White House again in 2024. The former president endorsed Walker and dozens of other high-profile Republicans in this year's midterm elections, but he ends with a mixed record in his most competitive contests.

Walker's campaign was plagued by repeated gaffes. A vocal anti-abortion advocate, he was also dogged by reports that he paid for multiple former girlfriends to have abortions, allegations that he denied.

Warnock highlighted those concerns in campaign appearances and a barrage of television ads that made the race the most expensive of the 2022 midterm season, with more than $400 million spent.

"I'm not going to make any excuses now, because we put up one heck of a fight," Walker told supporters as he conceded on Tuesday.

Many began dancing, some held their drinks in the air, and others took selfies to memorialize the moment. The group, a mix of young people, political activists, and wealthy professionals and donors, reflected the coalition of voters that Warnock drew on to win the contest.

The contest went to a runoff after neither candidate secured 50% of the vote on Nov. 8.

Warnock's victory was powered by a strong showing in urban and suburban counties, including Atlanta's Fulton County, where the incumbent Democrat was winning 77% of the vote - a higher share than he won in November.

Democrats now are on track for a 51-seat majority in the 100-seat Senate, which will make it slightly easier to advance Biden's nominees for judicial and administrative posts.

Much legislation will still require Republican support. But, with an extra vote to spare, Democrats may not now always need the cooperation of centrist senators Joe Manchin and Kyrsten Sinema, who were frequently at odds with their party as Democrats tried to advance Biden's ambitious legislative agenda over the past two years.

They will, however, face a more formidable roadblock in the U.S. House of Representatives, after Republicans won a narrow majority on Nov. 8, though they fell short of the "red wave" that some in the party had forecast.

Warnock, who like Walker is Black, is pastor of the historic Atlanta church where assassinated civil rights leader Reverend Martin Luther King Jr. preached. It is his second runoff victory in two years, after he won the seat in January 2021.

Venkayla Haynes, 28, said Warnock's win was especially meaningful after months of organizing get-out-the-vote efforts for both the general election and then the runoff.

"I'm very happy, I'm very excited that we won and that Black people have a candidate who represents the community and the issues they care about," said Haynes as she danced at Warnock's victory party.
#Donald Trump  #Joe Biden