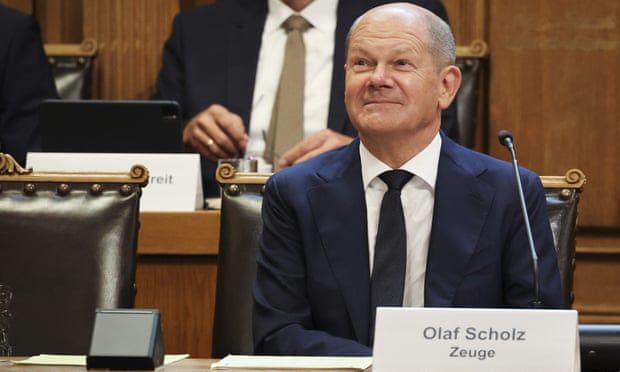 Previously unseen emails put former Hamburg mayor Olaf Scholz back in spotlight over €300m fraud scheme
The German chancellor, Olaf Scholz, on Friday again denied allegations that he held a protecting hand over a local bank found guilty of a multimillion euro tax fraud scheme while he was mayor of Hamburg, as the centre-left politician was questioned by a state parliamentary committee in the northern city for a second time.

Hamburg-based MM Warburg & Co, Germany’s oldest and largest private bank, is alleged to have swindled the German state out of an estimated €300m through the so-called “cum-ex” scheme between at least 2007 and 2011.

Cum-ex deals involve trading shares at high speed on or just before the dividend record date – the day the company checks its records to identify shareholders – and then claiming two or more refunds for capital gains tax that had in fact been paid to the state only once.

Scholz, now the head of Germany’s three-party coalition government, agreed in September 2016 to meet Warburg’s boss at the time, Christian Olearius, while the bank was already under investigation by financial authorities and faced having to pay back €47m in taxes.

Shortly after the meeting, Warburg was told by Hamburg authorities that it did not have to pay the bill after all – a decision partly revoked a year later by the federal finance ministry in Berlin.

On Friday Scholz dismissed as “suppositions and insinuations” claims made by opposition politicians that he had influenced the tax authorities’ waiver by asking Olearius to forward a document outlining his defence to the city’s state minister for finance.

Even though the allegations centre on events that took place six years ago, the affair has captivated German national media again in recent weeks due to the emergence of previously unknown details.

This week it emerged that investigators working for the public prosecutor in Cologne had seized emails from Scholz’s former office manager that suggest the then mayor may have deleted data pertaining to the matter. The Frankfurter Allgemeine Zeitung said the emails clearly “incriminate” Scholz.

The meeting between Scholz and Olearius was described in the former Warburg boss’s seized diary. This was cited in court and leaked to the Süddeutsche Zeitung, though the politician said he could not remember what they talked about when first questioned by a parliamentary committee.

He said he had given no “special treatment” to the banker, whose lending house plays a powerful role in Germany’s second largest city and played a part in rescuing the local shipping company Hapag-Lloyd from a sale in 2008.

At the chancellor’s annual summer press conference in early August, Scholz sounded increasingly frustrated when pressed by journalists on the affair.

“An incredible number of people have been interviewed, an incredible number of files have been scrutinised,” the Social Democratic party (SDP) politician said. “And if you follow the press coverage about the relevant hearings, there’s always the same result: no political influence was exercised when it came to the decisions. I am convinced that this understanding won’t change, that’s very clear after two and a half years.”

Prosecutors in Hamburg backed the chancellor’s stance on Tuesday this week, rejecting a legal complaint seeking to open criminal proceedings against Scholz and ruling they had so far seen no reason to investigate him.

Delegates of the conservative Christian Democratic Union (CDU) and leftwing Die Linke in Hamburg want to expand the investigative committee’s reach to also look into the cum-ex activities of Hamburg Commercial Bank (formerly HSH Nordbank), which would probably lead to more appearances by the chancellor.