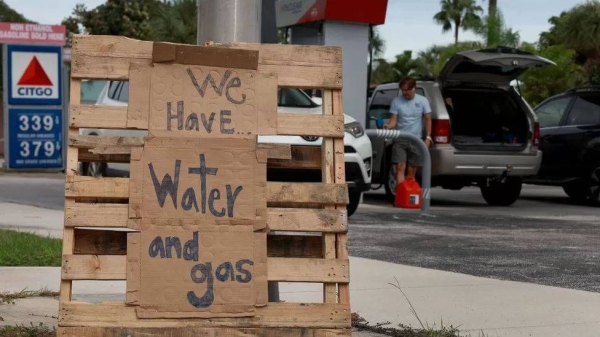 Residents in Florida are anxiously bracing for life-threatening tidal surges, floods and winds as Hurricane Ian approaches.
The storm has already thrashed western Cuba and is expected to intensify before it makes landfall in Florida.

The Tampa Bay region, which is home to more than three million people, is among the most vulnerable places in the US for severe flooding.

The region could see its first direct hit by a major hurricane since 1921.

"It's been around 100 years since Tampa had a direct hit. They've just been lucky for a long time," said Erik Salna, associate director of the International Hurricane Research Center.

Low elevation, rising sea levels, and a large population increase the risk of a catastrophic tidal surge. The Tampa area has all three, according to Mr Salna.

If hit directly, the region could be "unrecognizable" in the next couple of days, he said. "The potential is there."

Hurricane Ian - currently a category three storm, packing winds up to 195km/h (120mph) - is forecast to gain strength as it moves northbound into Florida, passing over the Gulf of Mexico's warm water on the way.

Tornados have been seen in southern Florida, the National Weather Service said, as Ian approaches the coast. Winds could reach up to 140mph before it makes landfall.

Ian is likely to lose speed as it nears Florida, effectively prolonging the storm's effects and threatening up to 20in (1.6ft) of rain in some areas.

And if it does hit Tampa, it will strike one of the state's most densely populated areas.

Over the last 50 years, development has surged along the Tampa region's nearly 700 miles (1,1200km) of shoreline, with people and buildings scattered along the mostly low-lying beach.

More than 2.5m Florida residents in a number of coastal towns and cities have begun to evacuate, with police going door-to-door in some areas and pleading with people to leave. Tampa Bay Mayor Jane Castor said on Tuesday that the city would also be implementing a curfew for remaining residents.

"My constant worry is under-evacuation," said Mr Olson. "People say they're going to stay there and wait it out, it just scares me."

The National Hurricane Center said there was a 100% chance of damaging winds and water along Florida's west coast, issuing a hurricane warning 175 miles wide, from Bonita Beach in the south to Anclote River, north of Tampa.

Residents have been buying water bottles in bulk, boarding up windows and moving garden furniture inside. Schools and universities have also canceled classes for the week.

Theme parks such as Disney World, Sea World and Busch Gardens in Tampa are closing as the storm bears down, while Nasa has postponed the launch of a moon rocket at Kennedy Space Center.

"This is not a drill," Mayor Castor said. "I don't know that it can get much worse, but I'm sure that there's a scenario that it can."

On one flight to Tampa on Tuesday, returning residents discussed the approaching storm. "Oh, you're right in the center of it," one man remarked to a couple living just south of Tampa.

In the airport, one man said he had not faced the prospect of a hurricane like this in his 43 years of living in the area. "It's the calm before the storm," he said.

The hope for Tampa residents is that the storm moves slightly south, making landfall in the less-populous Fort Myers region.

"I toyed with the idea of writing a disaster movie - a storm goes across Cuba, becomes intense, goes up the west coast of Florida - you know how those movies go," said Hugh Willoughby, a meteorology professor at FIU.

Instead, he told the BBC that Florida's Gulf Coast may suffer a real-world disaster. "It's probably not going to be the worst case scenario, but it's potentially a really bad situation."