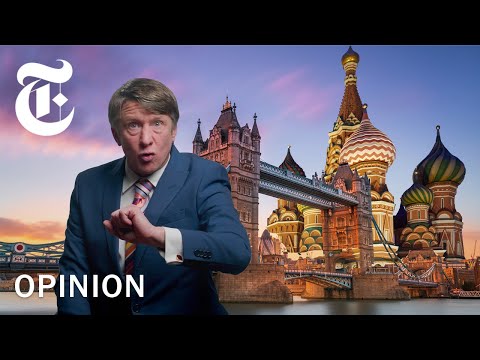 Jonathan Pie: Welcome to London laundromat, a one-stop corruption shop for anyone who needs to hide their money away

87,000 homes in Britain were bought through offshore companies by anonymous millionaires. At least 1.5 billion pounds’ worth of those are owned by Russians with direct links to the Kremlin. London is the money-laundering capital of the world, bar none. It’s the only industry we have left. Without it, we’d just be a car park for France.

For 20 years, Putin has been using illicit money to fund an oligarchy of billionaires, to keep his corrupt regime in power.

And for 20 years, those Kremlin-approved oligarchs have been coming here to invest their ill-gotten gains via a loophole that allows people to buy property in the U.K. anonymously.

“These are homes valued at tens of millions of pounds, a cluster of Russian jewels.”

At least 1.5 billion pounds’ worth of those are owned by Russians with direct links to the Kremlin. London is the money-laundering capital of the world, bar none.

What an accolade.
The London laundromat, a one-stop corruption shop for anyone who needs to hide their money away with no questions asked.

We have let it happen for years, because it’s how the U.K. makes money.

It’s the only industry we have left. Without it, we’d just be a car park for France.
Open Britain, where anyone — arms dealer, drug dealer, people trafficker, warlord or, in this case, hundreds of Kremlin-backed millionaires — can rinse their dirty money clean by buying up the most expensive houses in London and, for the most part, leaving them empty, which inflates the market so much that the rest of us have to sell a kidney just
to buy a shed.

This is the legendary UK commentator, Jonathan Pie.

The British version of the American George Carlin.

In response to Russia’s invasion of Ukraine, governments are taking aim at the superwealthy with close ties to Vladimir Putin, hitting them with sanctions, cutting off their access to offshore wealth, seizing their luxury yachts and villas and generally making it difficult to be a filthy rich person.

But in the Opinion Video above, Jonathan Pie, the fictional broadcast journalist played by the comedian Tom Walker, argues that even while the United States and the European Union have come down hard on Russian oligarchs, Britain has taken a gentler approach. This response, he argues, is the result of a dark symbiotic relationship that the country has developed with ill-gotten Russian money.

For years, Russian wealth has poured into Britain with few questions asked, helping to finance political campaigns and buoying the luxury property market. Russian oligarchs have been so happy to avail themselves of Britain’s laissez-faire regulatory climate to park their wealth and launder dirty money that the nation’s capital has earned the moniker Londongrad.

And that, Pie argues, is why the British government has been reluctant to step up the pressure on the Russian elite. Stronger sanctions, he argues, would risk hurting Britain even more than they would Putin and his cronies.

“And this was Putin’s plan all along,” Pie asserts. “For 20 years, he’s been slowly neutralizing us as a threat — by using our own greed against us.”

Jonathan Pie videos were previously licensed to RT — formerly known as Russia Today — in the U.K. Mr. Walker has never worked for the network and has had no relationship with it since 2016.