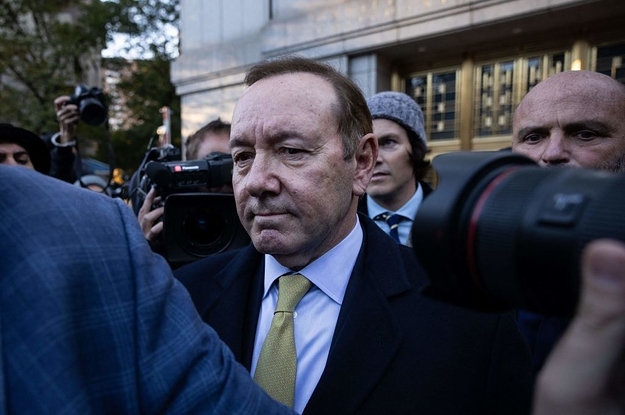 The Crown Prosecution Service announced the seven new charges Wednesday, saying they were "for a number of sexual assaults against one man between 2001 and 2004."

In May, the 63-year-old actor was charged in the UK with four counts of sexual assault against three men — each of which could be punished by six months in prison or an unlimited fine, according to Reuters. He was also charged with "causing a person to engage in penetrative sexual activity without consent," which carries a maximum sentence of life in prison.

Spacey has pleaded not guilty to the prior UK charges, the trial for which is scheduled to begin in June 2023. His representatives did not immediately respond to a request for comment from BuzzFeed News on Wednesday.

"The Crown Prosecution Service reminds all concerned that criminal proceedings against Mr. Spacey are active and that he has the right to a fair trial," Rosemary Ainslie, head of the CPS Special Crime Division, said in a statement.

The new charges come just over a month after Spacey won a civil lawsuit brought by fellow actor Anthony Rapp, who accused Spacey of sexually assaulting him when he was 14 and Spacey was 26. Rapp first spoke about the alleged incident in a BuzzFeed News story in 2017, after which more than a dozen others came forward with similar accusations.

Spacey has faced numerous legal battles relating to the claims against him.

In August, a judge ruled that Spacey must pay $31 million in damages to House of Cards production company MRC for alleged sexual misconduct on set and monetary losses resulting from his removal from the show.

He was also accused of groping an 18-year-old in a Nantucket restaurant in 2016, but the case was dropped in 2019 after the individual refused to answer questions in court about his cellphone, citing his Fifth Amendment right not to potentially self-incriminate, according to the Boston Herald.

Another case against Spacey, in which an anonymous massage therapist accused the actor of sexually assaulting him during a 2016 session, was dropped after the alleged victim died prior to the trial.