Heavy rainstorms destroyed at least 10 buildings on the island, which is around 20 miles off the coast of Naples.

Landslides have destroyed buildings and left residents cut off on the Italian holiday island of Ischia, authorities have said.

A woman has been found dead and about 10 people are still missing, Claudio Palomba, the prefect of Naples, told reporters.

A further eight people who had gone missing have been found, including a child, Mr Palomba added.

Italian news agency ANSA also said the body of a woman had been discovered.

Earlier, Interior Minister Matteo Piantedosi said there had been no confirmed deaths - contradicting a previous statement from deputy prime minister Matteo Salvini, who said eight people were confirmed to have died.

Mr Piantedosi said some residents were believed to be under the mud, while about 200 had to be evacuated from buildings at risk of collapse. "Weather conditions are still challenging," he commented.

Heavy rainstorms and flooding caused several landslides in the town of Casamicciola Terme, which is around 20 miles (32 km) off the coast of Naples.

Almost five inches of rain fell in six hours - the heaviest for 20 years, according to officials. 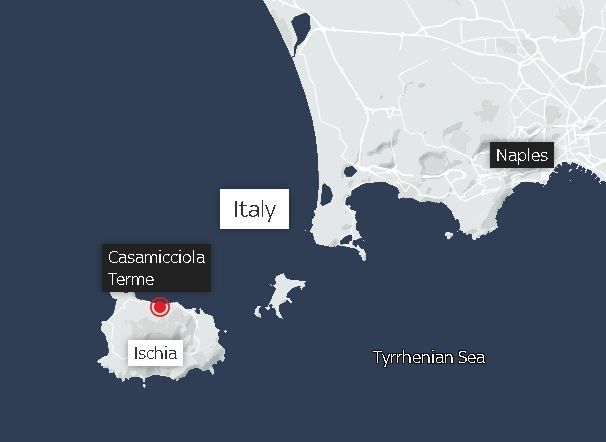 Images from the island showed thick mud and debris, with several cars submerged on the shoreline.

Italy's fire brigade tweeted that seventy fire fighters were on the island, rescuing residents from damaged buildings and searching for the missing.

Motorboats and helicopters involved in rescue attempts have struggled to access the island because of the bad weather, the brigade said.

Resident Lisa Mocciaro told the news agency there had been heavy rain from "around midnight".

"From 3am we started hearing roars. The first landslide came down, then another around five," she said.

Beniamino Iacono's business has been destroyed. "I had three shops, all next to each other, selling household appliances, Christmas items," he said.

"I've lost everything in this tragedy. I don't know what to say, we need help."

"I will have to refurbish everything. I don't know how long it will take."

A video showed a man clinging onto the outside of a window covered in mud from the landslide.

When rescuers discovered him on Saturday morning they told him to keep his feet on the ground before they were able to save him.