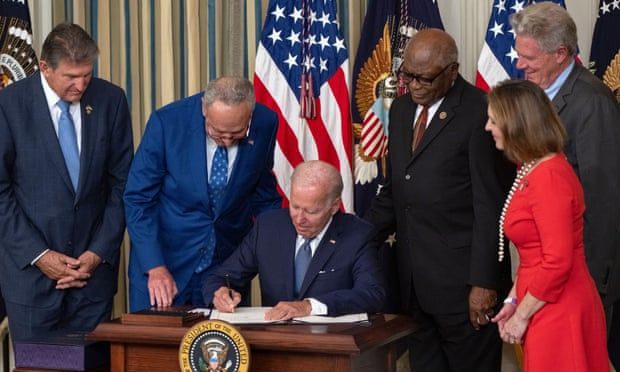 Part of the key to collective action may be to overcome the ‘false social reality’ that makes us assume no one else cares about the climate
America is polarized, but a new study has revealed one issue on which the nation is surprisingly united: mitigating climate change.

Yet Americans themselves underestimate the US population’s concern for the state of the climate and support for major climate mitigation policies – by a whopping 80–90%, according to researchers from Boston College, Princeton University and Indiana University Bloomington.

In a peer-reviewed article, researchers shared the results of a nationwide survey of 6,000 Americans, for which participants were asked to estimate the percentage of Americans who were “at least somewhat concerned about climate change”. Participants also estimated the percentage of Americans they thought supported specific climate policies including carbon taxes for fossil fuel companies, renewable energy mandates, building renewable energy projects on public lands, and a Green New Deal.

Regardless of political orientation, education, age, race, media preferences and income, the study found all Americans vastly underestimate how much their compatriots care about climate change and support green policies.

“Climate policy and concern about climate change are much more prevalent than you think in the US,” one of the study’s authors, Gregg Sparkman, told Scientific American. “And virtually everyone in the country seems to greatly underestimate how popular climate policy is and to underestimate how concerned their fellow Americans are about climate change.”

Despite polls by Yale’s Program on Climate Change Communication showing that a “supermajority” of 66–80% of Americans support these climate policies, the average American estimates that only a minority of 37–43% of the public are down for the eco cause. Republicans proved especially pessimistic about how much people care about climate change, though virtually half of Republicans are pro-climate policies, says Sparkman. In truth, the issue of securing a livable future appears to enjoy bipartisan support.

It turns out that the feeling of being alienated in one’s concern for the environment is as widespread as it is unfounded. In fact, this study captures a phenomenon known as “pluralistic ignorance”, a shared misconception of the thoughts and behaviors of others. In this case, pluralistic ignorance results in what the authors call a “false social reality” in which many of us perceive that others aren’t willing to take action on climate issues, and overestimate how many Americans are indifferent to, or in denial of, climate change.

Ending the misconception that most Americans don’t care about climate change and truly appreciating how popular eco-friendly policies are could give such measures valuable momentum and support, and encourage politicians to pursue greener agendas. Moreover, understanding that there’s nothing fringe about caring about the environment could help people feel more confident discussing their green politics with peers. The perception that people are unified in the desire for pro-climate legislation is a powerful thing – it becomes easier to take action when we know that people actually support collective solutions.

The reassurance that we are all on the same side when it comes to reducing the effects of climate change could also help us manage climate anxiety and feel more optimistic about the future. Young people are especially struggling with the latter; a 2021 Bath University survey of more than 10,000 teens and young adults across 10 countries found that 75% believe “the future is frightening”, with researchers linking youth psychological distress to government inaction on climate change.

Published in the wake of Democrats’ passing of the landmark Inflation Reduction Act, a $369bn investment in renewable energy and emissions reduction, this research suggests Americans are united in the fight against climate change, and that’s a good thing. Have no misconceptions about it: mitigating climate change will require a collective effort.