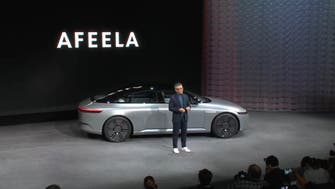 The joint venture’s first car to roll out on the CES stage was a sedan featuring 45 sensors, including cameras, radar and ultrasonic sensors. It is “a software-defined vehicle, Qualcomm CEO Cristiano Amon said during the presentation. Sony said it would keep the Afeela cars constantly updated, and Amon said his company’s Snapdragon Digital Chassis would be designed to enable that.

Tesla Inc. has set the standard for connected vehicle experiences, through the regular addition of games and other enhancements over the course of owning one of its vehicles. Sony, Honda and many European automakers like Volkswagen AG are now collaborating to combine car manufacturing capabilities with electronics firms’ knowledge of entertainment, networking and sensors to shorten development times for smart electric vehicles.

Epic Games will work with Sony Honda to help “deliver connected automotive experiences that lead the way not only in visual communication and safety but also entertainment, Epic Games Chief Technology Officer Kim Libreri said at the event.

The joint venture between Sony and Honda was made official in October, promising to deliver premium EVs in North America and Japan starting in 2026.
#Tesla