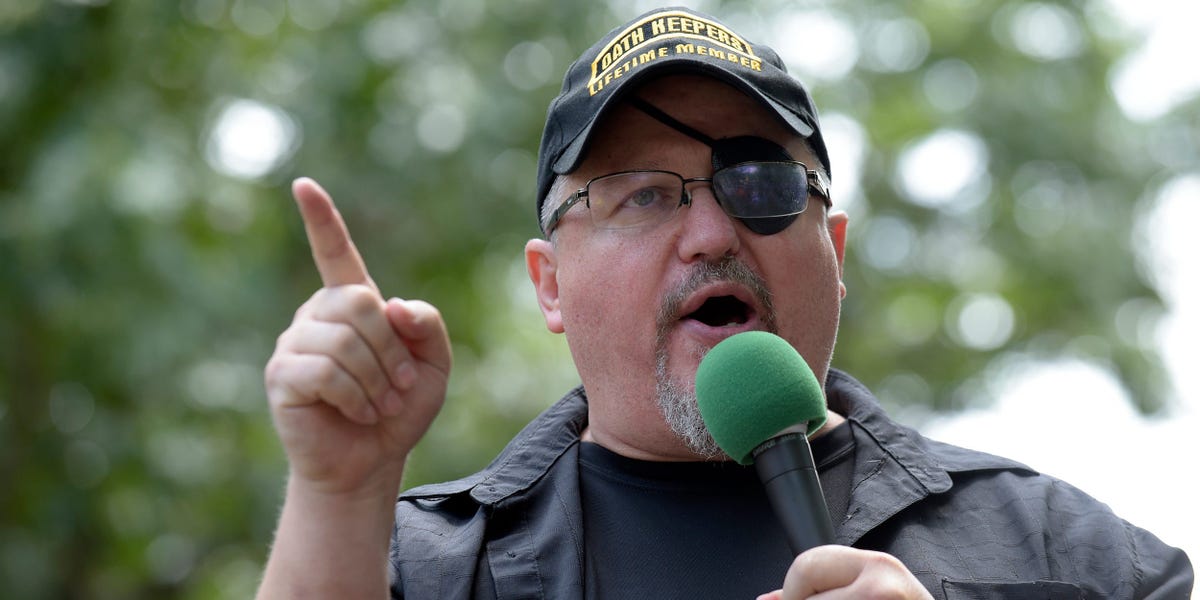 The Oath Keepers branded themselves as defenders of liberty. In the end, they tried to keep the loser of an election in power.
It's always a question when someone or something — a friend, lover, or anti-government paramilitary organization — turns out to be rather quite bad: Were they always this bad, and we just ignored the signs, or did they actually change along the way, from good and decent (or not so obviously terrible) to out-and-out toxic?

The Oath Keepers, to be sure, are not to be confused with a charming but a little bit problematic ex. Founded in 2009, it is a far-right militia that recruited among the ranks of law enforcement.

A dozen years ago, before Oath Keepers founder Elmer Stewart Rhodes was convicted of seditious conspiracy along with another member of the Oath Keepers, Kelly Meggs for helping organize an invasion of the US Capitol during the January 6 insurrection (three other members of the group were found guilty of related felonies, but found not guilty on the count of seditious conspiracy), it was at least possible, if not advisable, to believe this was merely a group of middle-aged, weekend cosplayers. President Barack Obama had just been sworn in as the first Black president and liberalism appeared ascendant, with the reaction to that predictable, often racist, but ultimately memes on Facebook and the Tea Party movement.

Rhodes also tailored his message, sometimes obscuring his far-right pedigree. In a 2011 interview with Reason, a libertarian magazine, he talked about his opposition to police militarization, "unconstitutional wars," and even white supremacy ("I'm part Apache Indian").

Radley Balko, the journalist who conducted that interview — and one of the country's best criminal justice reporters — has admitted to being a bit fooled, recently penning a "big honking mea culpa" in which he expressed regret for being "fairly credulous," a product, in part, of believing liberals were being hysterical about the threat posed by the far right.

"It's at least possible that Rhodes wasn't completely bullshitting me, and only became radicalized at some point after our interview," Balko wrote, noting his claimed opposition to police brutality against people of color.

But there were also plenty of red flags.

A look at the list of 10 orders the Oath Keepers insisted its members — cops and soldiers — would not carry out reveals as much. It includes the unsurprising, such as a declared refusal to enforce any attempt to "disarm" the populace — a right-wing bugaboo whenever a Democrat occupies the White House. To be sure, there are also a few items that, while standard-issue for any anti-government type, were at odds with post-9/11 conservatism, such as opposition to warrantless searches or the designation of any US citizen as an "enemy combatant" subject to military justice.

These principles, as it were, could apply to any administration and that is indeed what the group insisted. Thanks to the magic of the Internet Archive, however, we can see just how they were received on the Oath Keepers' website at the time.

"I sincerely believe that Obama is a Marxist Dictator-in-Waiting. God help us all," one user wrote. "I believe that you (Mr. Barak Hussein Obama [sic]) are not an American," another user commented. "You were raised in other cultures, and do not have the same traditions, history, and values we do." Several also insisted that the federal government, under its new president, was intending to infect the public with swine flu to manufacture a pandemic, the end goal, one insisted, being to "implement a forced mass vaccination program which would be the means of administering a toxic biological agent."

The irony was not lost on all commenters. One user wondered where the spirited defense of civil liberties — putting aside birth certificates and vaccines — was under George W. Bush. "I am most upset that Obama has not pushed back as hard as I would like," the person wrote, "but this web page would never have been put up 8 years ago and many who are now wildly in favor of it would be the ones enforcing exactly the points you speak against."

We now have enough evidence to assess that claim: yeah, pretty much. Those who feared federal emergency management would lock up citizens, under a Democrat, pivoted to getting mad about "antifa" and Black Lives Matter during the Trump years; some even boasted of their supposed collaboration with the federal government, fearing socialists and anarchists much more than the state they feared so much under Obama. Now, under another Democrat, the federal government and its three-letter agencies are once again the enemy du jour.

Rachel Carroll Rivas, a long-time watcher of the far right and a researcher at the Southern Poverty Law Center, believes the Oath Keepers started out where they ended up, the riot at the US Capitol the apex of a conspiratorial movement steeped in racialized fears. She's hopeful the lesson has been learned.

"I think the public and the media have gotten better at understanding the pitch of the anti-government militia movement," she said in an interview. "The pitch is wrapped in a flag — it's false patriotism — and there's a lot of libertarian, constitutionalist talking points. But there is, in my take, nothing different about the underlying threat that Oath Keepers posed from day one."

Of the riot on January 6, Carrol Rivas added: "I think Stewart was saying, and the members were saying, that this was what they were going to do in 2009. And then they did it."
#Facebook  #Vaccines