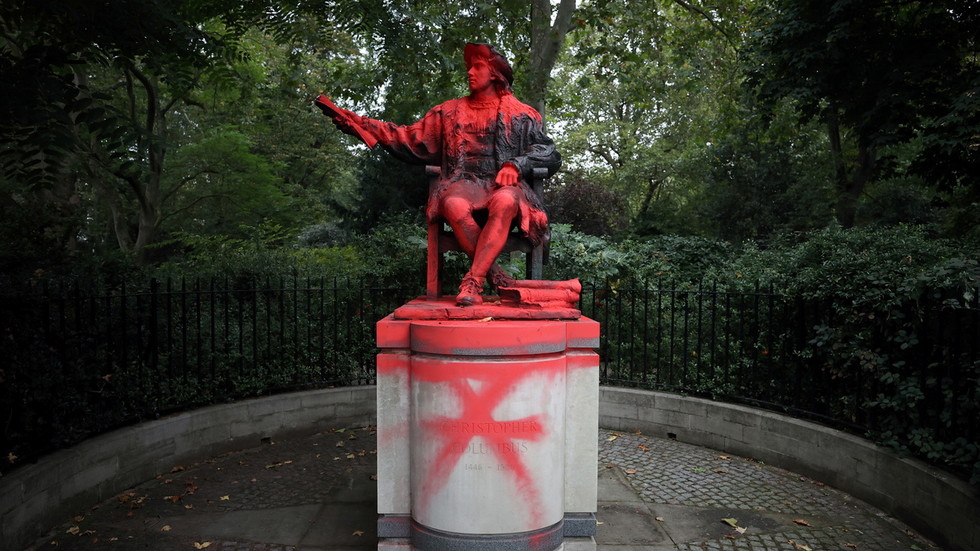 The war on statues is not a fight over 'context' & 'colonialism'. It is a naked attempt to control the past, and hence the present

This week saw last summer's craze of defacing public statues return, as an effigy of Christopher Columbus in London was doused with red paint. This infantile demonisation of all Western historical figures has to stop.
In fourteen hundred and ninety-two

He had three ships and left from Spain;

He sailed through sunshine, wind and rain.

So goes the once-popular children’s rhyme by Jean Marzollo. But perhaps it now needs updating:

His statue: attacked by haters;

Who covered him up with red paint,

To remind us he was no saint.

Okay, I’m clearly no poet. But then again, few children today are likely to have come across the original ditty. Once, history was seen as a powerful source of stories that could excite, inspire, and cultivate national pride. Today, it only ever offers lessons in guilt, shame, and self-loathing. We are expected to denounce the past and do penance for its sins.

There is something inherently medieval about attacking statues. Public tributes to historical figures – statues, street names and plaques – are vandalised, erased, or ‘contextualised’ with instructions on the correct way for observers to respond. Campaigners seem unable to distinguish between inanimate objects and real people as they punish lumps of metal in moral purification rituals.

Earlier this week it was the turn of Christopher Columbus. Protesters vandalised London’s monument to the Italian explorer by covering it with red paint. Their unsubtle message is that the man who discovered America has blood on his hands. They want Columbus – if he must be remembered at all – to be commemorated as a criminal rather than a hero. They want him to be associated with slavery and the deaths of indigenous people rather than with derring-dos on the high seas.

Columbus is in good company. The statue of Winston Churchill in London’s Parliament Square is routinely daubed in graffiti. During last year’s Black Lives Matter protests, the words “Churchill was a racist” were scrawled on the plinth. It is now covered up by police whenever demonstrations are likely to occur. Bristol’s statue of merchant and slave trader Edward Colston met a far more destructive end. It was pulled down by protesters, dragged to Bristol harbour, and dropped in the sea.

The war on statues is a battle for Britain’s past. Up for grabs is how history should be remembered and who gets to write the narrative. Protesters fear that, left to their own devices, British citizens will cling on to a version of the past that glorifies empire and skates over injustices. Today’s barbarians believe that if we associate the past with anything positive, then we legitimise white supremacist thinking in the present. Far better to erase the past entirely and start from scratch with a new, more politically acceptable island story.

When they are prevented from doing this, protesters insist historical monuments must be placed ‘in context’, with explanatory texts flagging up exactly what we are to find ‘problematic’. Campaigners have long demanded the removal of the statue of Cecil Rhodes from the entrance to Oriel College in Oxford. Having failed to get their way, they have produced a plaque to ‘explain’ what they think Rhodes did wrong. The newly in-place sign describes Rhodes as a “committed British colonialist” who “obtained his fortune through exploitation of minerals, land and peoples of southern Africa. Some of his activities led to great loss of life and attracted criticism in his day and ever since.”

Bristol’s statue of Edward Colston has been similarly contextualised. Retrieved from the water, it is now on display in the city’s museum. It does not stand erect, but lies horizontal, the paint thrown at it in the midst of the protests still visible. Accompanying text tells observers of Colston’s crimes. The whole thing is a tribute not to Colston but to the protesters. The recumbent Colston has become a celebration of the Black Lives Matter movement.

Clearly, there is nothing wrong with providing members of the public with historical information. But the problem with the current crop of ‘contextualisations’ is they foreground the sins of historical figures and drown out all achievements. Their aim is not to tell us about the past at all, but to inform the present. The message is that we must not feel pride but shame. Despite the fact that people have walked past statues for decades, mostly without a passing glance, we must now think that this street furniture legitimises current injustices.

This approach is historically illiterate. It asks us to draw a direct line between past events and people’s experiences today – as if oppression and privilege are still allocated according to decisions made centuries ago. It pretends that historical figures are not complex products of the times they lived in but are, instead, simplistically ‘good’ or ‘bad’. The war on statues is also undemocratic: it allows for history to be rewritten by those who shout loudest.

One group of scholars is now fighting back. History Reclaimed, with which I am proud to be associated, has been set up to challenge “the abuse of history for political purposes” and push back against attempts to “rewrite the histories of Western democracies so as to undermine their solidarity as communities, their sense of achievement, even their basic legitimacy.” They recognise that “Free societies depend on popular participation, trust and solidarity. They need a sense of common purpose and self-worth. A shared history is a necessary foundation for a successful democracy.” Let’s wish them every success.