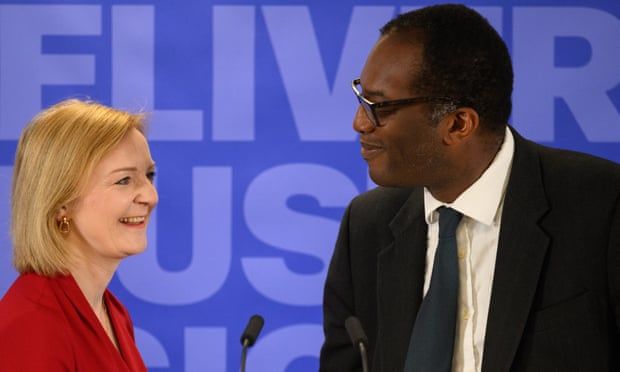 Liz Truss expected to make James Cleverly foreign secretary, Suella Braverman home secretary and Kwasi Kwarteng chancellor
For the first time in Britain’s history, there will not be a white man in one of the four great offices of state.

Kwarteng, who is set to become the UK’s first Black chancellor, will take the reins of a position where three of his Tory predecessors were also from Black, Asian and Minority Ethnic (BAME) backgrounds.

The expected appointments were welcomed by some, including Boris Johnson’s former race adviser, Samuel Kasumu, who resigned last year after a controversial a report by the Commission on Race and Ethnic Disparities, which critics said dismissed institutional racism.

“The new cabinet is another reminder that people from all backgrounds can go far within the Tory party,” Kasumu said. “The challenge for us is to have this diversity reflected among who votes for us. It will be key to the party’s future success.”

Kasumu recently co-founded the 2022 Group, an organisation aimed at improving the Conservative party’s “toxic” brand and its relations with the UK’s African-Caribbean communities.

“Labour has been taking ethnic minority voters for granted for as long as I can remember. It’s one of the reasons why I joined the Conservative party. I wanted to make sure that people from backgrounds like my own had genuine choice,” he said.

“As a party we are open and keen to utilise talents from across the country. But there is more to do to broaden our appeal to minority ethnic communities.”

Research from Queen Mary University of London from 2018 indicates Conservative party members are 97% white, compared with 96% for Labour and the Liberal Democrats.

Simon Woolley, who founded Operation Black Vote in 1996 to increase the number of Black MPs, said the new appointments would be “unprecedented”.

“This is unprecedented for any political party,” Woolley acknowledged. “But even more than the diversity, it is about policy. It’s no good having great diversity if that cohort of MP’s continue to engage in faux-culture wars that in effect put poor white people against poor black people,” he said. “I desperately hope that they won’t. I also hope that they will acknowledge and deal with persistent race inequality.”

Braverman will become the second British member of parliament of Indian origin to be appointed as home secretary if she succeeds Priti Patel who stepped down on Monday.

In a statement, Conservative Friends of India applauded the Conservative party’s diversity. “Suella has been an outstanding candidate who has worked her way up the party ranks from her humble beginnings in Wembley,” the statement said. “It reflects that the Conservative party is the true party of inclusivity and meritocracy, where everyone has the chance to excel regardless of background.”

But Shaista Aziz, a Labour councillor in Oxford and an anti-racism campaigner, described Braverman’s appointment as “horrifying”, because of her support of former home secretary Sajid Javid’s decision to revoke Shamima Begum’s citizenship in 2019, and her calls for the UK to leave the ECHR in wake of the Rwanda ruling.

“It’s horrifying that she is someone who has supported the Rwanda deportation policy, the further demonising of refugees and migrants, and also the issue of Shamima Begum,” she said.

“It’s not enough to be a Black or ethnic minority politician in this country or a cabinet member. That’s not what representation is about. That’s actually tokenism,” Aziz said. “I do not believe that these three appointments are going to change anything for the vast majority of people of colour in this country, particularly those of working-class backgrounds. I cannot celebrate these politicians, knowing what their track record is at a time of deep division”.
#Boris Johnson  #Priti Patel  #Johnson