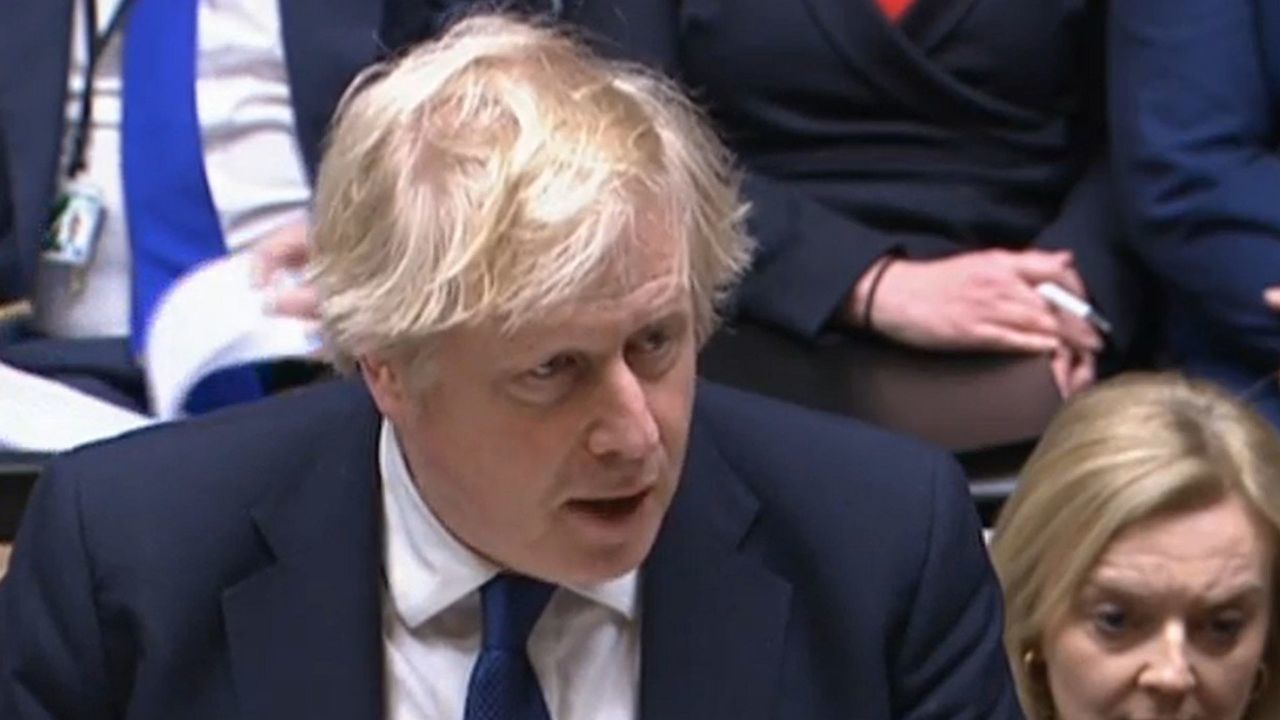 Major Russian banks will be excluded from the UK financial system and oligarchs have been targeted in new sanctions announced by Boris Johnson.

The prime minister told the House of Commons they were "the largest and most severe package of economic sanctions that Russia has ever seen".

Russia's national airline Aeroflot will also be banned from landing in the UK.

It follows Moscow's invasion of Ukraine which began with air strikes in the early hours of Thursday morning.

Mr Johnson told MPs that Russian President Vladimir Putin was a "bloodstained aggressor" who would "stand condemned in the eyes of the world and of history" for invading Ukraine.

Announcing the measures, the prime minister said the UK and its allies had "tried every avenue for diplomacy until the final hour", but he believed Mr Putin had always been determined to attack Ukraine.

Mr Johnson said the G7 group of world leaders had agreed to work in unity to "maximise the economic price that Putin will pay for his aggression".

He also confirmed that sanctions would be applied to Belarus for its role in the assault on Ukraine.

Sanctions announced by the prime minister include:

*  All major Russian banks will have their assets frozen and be excluded from the UK financial system. This will stop them from accessing sterling and clearing payments through the UK. This includes a full and immediate freeze of VTB bank

*  Asset freezes will be placed on 100 new individuals or businesses

*  Aeroflot will be banned from landing in the UK

Those being targeted by sanctions include five people deemed to be part of Mr Putin's "inner circle", the Foreign Office said in a statement issued after Mr Johnson's announcement.

These include Mr Putin's ex-son in law Kirill Shamalov who was previously married to his daughter Katarina and is Russia's youngest billionaire.

Other targets include Petr Fradkov, head of the recently sanctioned Promsvyazbank and son of the former head of Russian Foreign Intelligence.

It also said it was moving to cut off wealthy Russians' access to UK banks, including a £50,000 limit on bank deposits.

Mr Johnson said the UK and its allies' mission was to ensure through diplomatic, economic, and eventually military means that the "hideous and barbarous venture of Mr Putin" ended in failure.

The prime minister chaired his second emergency Cobra committee of the day on Thursday evening, followed by a cabinet meeting.

He told cabinet that the Ukrainian military was fighting back in "defiance of Putin's attempts to subjugate Ukraine" and that advisers had given an "ominous assessment" of the next few days.

Foreign Secretary Liz Truss said the UK would "not rest until Russia's economy has been degraded and Ukraine's sovereignty and territorial integrity restored".

The new measures expand the sanctions that were announced by the UK government on Tuesday, which included targeting high-net worth individuals and Russian politicians who voted to declare Donetsk and Luhansk independent.

A number of MPs and defence experts said those measures had not gone far enough.

On Thursday, US President Joe Biden also announced sanctions against Russia, including against its banks and people who "personally gained from the Kremlin's policies".

There was plenty of criticism that Western sanctions in the days leading up to this invasion did not go far enough, fast enough.

These new measures will hit the Russian economy much harder. But there are still potential gaps. The prime minister said sanctions will take place against major Russian banks. But one, Sberbank, was not mentioned.

And the Ukrainian government wanted more - in particular moves to disconnect Russia from the international payment system known as Swift. The US and the UK back such a move, but some European countries fear it could damage their own banks.

Suspending Russia from Swift is still under consideration, but the hesitation is a reminder that in a globalised world all sanctions tend to have an impact on the countries imposing them as well

And the real trouble with sanctions is they don't work quickly. They do increase pressure, and they can do damage.

But the international community is not trying to damage the Russian economy just for the sake of it. It wants economic pressure to force a change in President Putin's political and military calculations.

Meanwhile, the invasion of Ukraine continues.

But he said there were changes that must be made in the UK.

"For too long our country has been a safe haven for money Putin and his fellow bandits stole from the Russian people" he said.

Conservative former Foreign Secretary Jeremy Hunt said that while sanctions are "extremely welcome" they should not only be economic and called for a "fundamental review of our military capability".

Conservative MP Tom Tugendhat, who chairs the Foreign Affairs Committee, urged Mr Johnson to take action against those "enabling Putin's economy" - including individuals who sit on the boards of the businesses which finance the Russian president's regime.

Liberal Democrat leader Sir Ed Davey said the West "cannot be complacent any longer" and called for a reversal of proposed troop cuts to the Army.

SNP Westminster leader Ian Blackford called for the "complete economic isolation of Russia", including "clearing up the sewer of dirty Russian money" in London and suspending Russia from the Swift payment system. 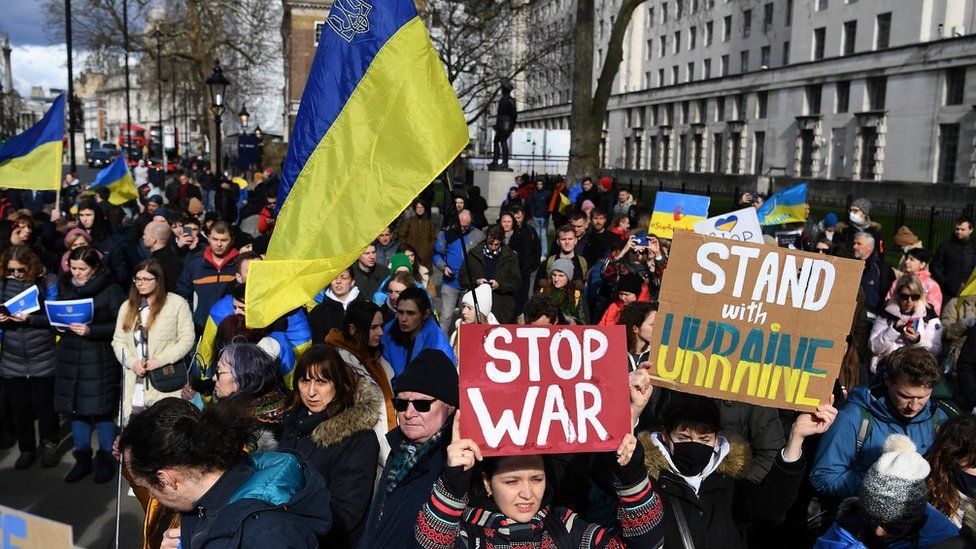 On Thursday morning Russian forces launched an assault on Ukraine, crossing its borders and bombing military targets near big cities.

Ukraine has announced martial law across the country, meaning the military has taken control temporarily.

Traffic jams have built up as people attempt to flee the capital Kyiv.

Meanwhile, the Home Office has said it will allow some Ukrainian nationals in the UK to extend their visas.

Those eligible for points-based work visas will be allowed to extend their stay or to switch from visitor visas and seasonal agricultural workers will have their visas automatically extended until the end of 2022.

Watch Boris Johnson tell MPs that the UK will squeeze Russia from the global economy
WATCH: How Russia's invasion of Ukraine unfolded on day one
#Boris Johnson  #Joe Biden  #Johnson