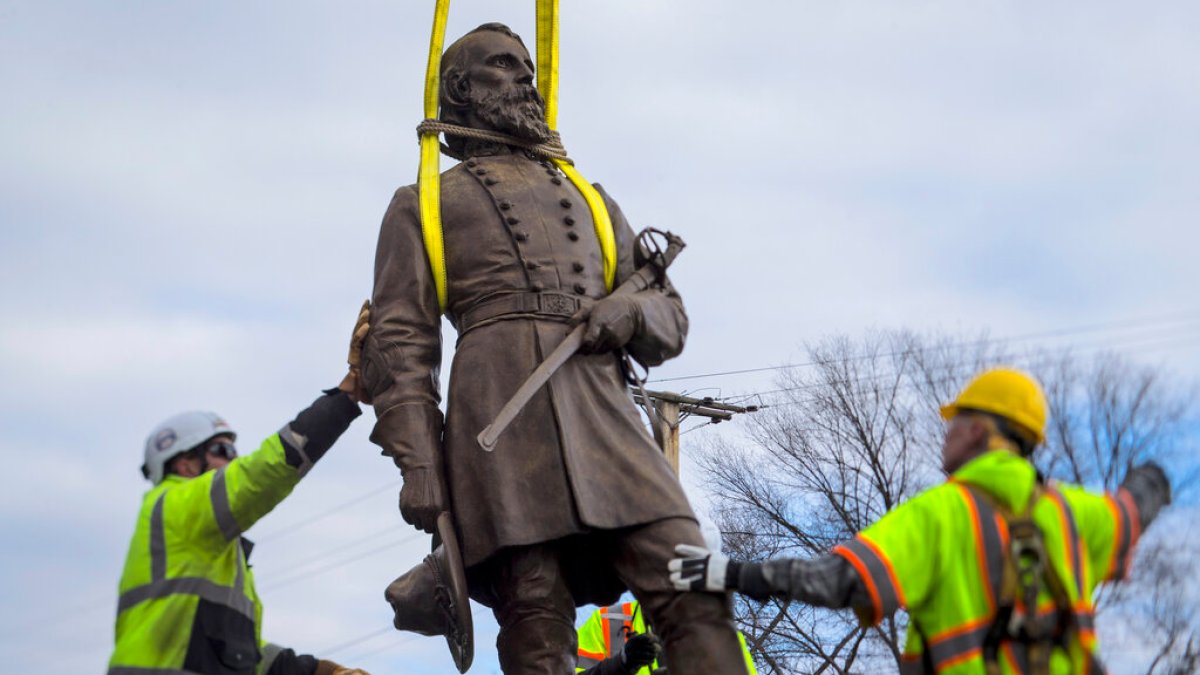 The statue of Confederate General AP Hill was removed on Monday, with a crane hoisting it off a monument and into a truck. The city has removed other statues memorialising members of the Confederacy, which fought a war to maintain the enslavement of Black people in the US.

Richmond Mayor Levar Stoney ordered the statues removed in 2020 as protests for racial justice swept the country following the murder of George Floyd, a Black man killed by police in Minneapolis, Minnesota.

“Over two years ago, Richmond was home to more confederate statues than any city in the United States,” Stoney wrote on Twitter on Monday. “Collectively, we have closed that chapter.”

The prevalence of statues honouring members of the Confederacy, many of whom were slaveholders, has remained a persistent and controversial issue in the US as discussions on the country’s legacy of racism continue.

Richmond began removing its remaining public Confederate statues in February, and has said that the statue of Hill will be given to the Black History Museum and Cultural Center of Virginia.

However, there are still hundreds of statues honouring Confederates across the US, and efforts to remove them have often sparked fierce and even violent backlash.

In August 2017, white supremacist and neo-Nazi groups amassed in Charlottesville, Virginia to push back against calls to remove a statue honouring Confederate general and slaveholder Robert E Lee.

The groups chanted racist and anti-Semitic slogans, and a self-described neo-Nazi killed 32-year-old Heather Heyer after he rammed his car into a crowd of counter-protesters.

While Confederate statues were erected across the country, most are concentrated in southern states that fought for the Confederacy during the US Civil War, which lasted from 1861 to 1865 and killed more than 600,000 people.

Critics see the statues as monuments to white supremacy and a regime that fought a war to maintain slavery and the violent domination of Black people. Others believe that calls to remove the statues represent the erasure of an important part of US history.

However, most Confederate statues were not erected immediately after the Civil War ended in 1865, but during later periods that often coincided with violent reaction to the expansion of the rights for Black people.
According to the Southern Poverty Law Center, which tracks hate groups in the US, the first period to see a rise in Confederate statues began around 1900, as states moved to enact racist segregation edicts, known as Jim Crow laws, that denied Black people basic rights.

That first period ended in the 1920s, when the white supremacist vigilante group the Ku Klux Klan was surging to notoriety.

The second period took place in the 1950s and 1960s as Black people in the US successfully pushed for greater rights during the civil rights movement.

During the 2020 protests for racial justice in the US, dozens of Confederate monuments were removed in several cities, including Montgomery, Alabama; Alexandria, Virginia; and Louisville, Kentucky.

Richmond’s removal of the AP Hill statue was especially contentious, as it was located in the middle of a busy intersection and had the general’s remains buried underneath.

Hill’s indirect descendants had called for the statue to be placed in a cemetery near his birthplace, but a judge ruled in October that the city had the right to decide where the statue should go next.