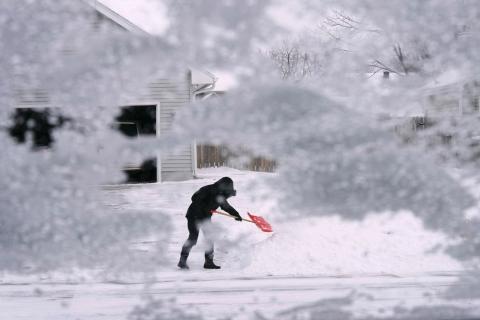 More than two-thirds of the US population was under an extreme weather alert on Friday as a deep freeze enveloped much of the country ahead of the holiday weekend, thwarting travel plans and leaving more than a million homes and businesses without power.
With a column of bitter cold that stretched from Texas to Montana starting to march eastward, more than 240 million people in the United States were under some sort of winter weather advisory on Friday, the National Weather Service said. Hard-freeze warnings were posted in parts of the Southern states of Louisiana, Alabama, Florida and Georgia.

Numbing cold intensified by high winds even extended to the US-Mexico border, with wind chill temperatures reaching the single digits in the border city of El Paso, Texas. Temperatures dipped into the teens in Fahrenheit throughout Texas' south-central Hill Country on Friday morning,

Weather forecasters said the blizzard over the Midwest had formed into a "bomb cyclone" over Lake Erie on Friday and was moving east and expected to drop blinding snow from the northern Plains and Great Lakes region to the upper Mississippi Valley and western New York state.

The weather service map of existing or impending wintry hazards "depicts one of the greatest extents of winter weather warnings and advisories ever," the agency said.

The Midwest's "bomb cyclone" -- a phenomenon that occurs when the air pressure drops drastically within a 24-hour period and speeds up a storm's intensity -- could drop upwards of 35 inches of snow in Buffalo, New York; 13 inches in Kalamazoo, Michigan; and 17 inches in Erie, Pennsylvania, weather service meteorologist Ashton Robinson Cook said.

The lowest temperature in the United States on Friday morning was recorded in Havre, Montana, where the thermometer read minus 38 F (minus 38 Celsius), Cook said. But the freeze in the American South could prove to be an even bigger public safety threat, as those regions are less accustomed to the cold and snow.

"Bundle up and stay indoors if you can, and check on your neighbors," Cook said.

Extreme weather across the country has disrupted households and holiday plans just days before Christmas. More than 1.25 million homes and businesses were without power across the southern and eastern United States on Friday morning, led by North Carolina, where more than 150,000 customers were without power, according to tracking site Poweroutage.us.

Severe winds, ice and snow have also upended commercial air traffic during one of the busiest travel periods of the year.

Nearly 3,500 flights within, into or out of the United States were canceled Friday, according to flight-tracking service FlightAware. That included more than 400 flights into or out of Seattle-Tacoma International Airport, as the Pacific Northwest woke up to ice and freezing rain caused by a separate storm system on Friday morning.

The American Automobile Association (AAA) had estimated that 112.7 million people planned to travel 50 miles (80 km) or more from home between Friday and Jan. 2, up 3.6 million travelers over last year and closing in on pre-pandemic numbers.

But that number was likely to be diminished by the treacherous weather complicating air and road travel going into the weekend.

"If there's any good news, it's that the storm has moved quickly over some areas," US Transportation Secretary Pete Buttigieg told MSNBC on Friday.

Buttigieg said many airports, such as Denver, "will be able to get back on their feet quickly" after a wave of delays and cancellations, with other hubs like Chicago possibly recovering later on Friday.

Forecasters predict some relief over the next day from the deep freeze in the northern Rockies and High Plains, where the Arctic blast first materialized on Thursday. Temperatures in regions could rebound by 40 to 60 degrees over the weekend as the cold air mass creeps east.

Last-minute holiday gift purchases may also have slim chances of reaching their destination by Christmas. FedEx Corp said on Friday customers can expect potential delays for some package deliveries across the United States, as the company experienced substantial disruptions at its Memphis, Tennessee, and Indianapolis hubs on Thursday night due to severe winter weather.